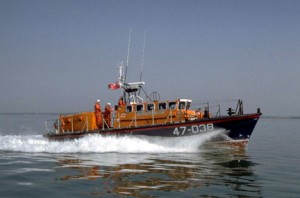 The William Street 47- 038 was built by FBM Ltd of Cowes at a cost of £560,000. She arrived at Fleetwood at 6pm on Wednesday October 4th 1989. She is powered by two 500 horse power diesels giving a top speed of 18 knots in any sea state. After a period of intensive crew training she was placed on service at 2pm on October 15th. She has a steel hull 47feet long and although primarily designed to be launched from a slipway, the William Street is moored afloat in the pen at Fleetwood. She has a crew of 6. The superstructure is made of aluminum, which reduces weight and gives a low center of gravity – which helps her self-righting capability. She has only just recently returned following an overhaul at Holyhead. Meanwhile, an identical Tyne Class relief boat – the Sarah Emily Harrop 47 – 037 was at Fleetwood. She had a proud history having previously served at Lytham. After the Sarah Emily Harrop developed a problem and had to return to Holyhead, another relief boat – The Good Shepherd 47- 012 was brought to Fleetwood to await the return of our boat. 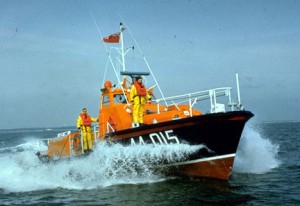 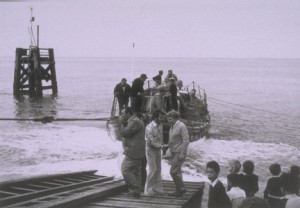