1.1885: Launched by Beeching Brothers Ltd, Gt. Yarmouth (Not recorded) for George Beeching (32/64), Hull & Thomas Kelsall (32/64), Prestwich as TALIFOO.
2.1885: Completed.
3.2.1885: Registered at Hull (H1425).
3.2.1885: George Beeching designated managing owner.
2.4.1887: Arrived Hull with barque CARDENAS (259tons) of Rostock (Capt Karff) in tow, picked up off Flamborough Head dismasted in a squall, whilst on passage Wilmington, Delaware for ‘Shields with cargo of resin and turpentine. Tow was difficult in gale force winds and heavy sees and cable parted several times.
28.2.1888: Sailed Hull for North Sea grounds (Sk. William Clements): eight crew all told.
8.3.1888: Returning to Hull in a good breeze and light rain with the third hand on watch, shortly after 4.30am. and in total darkness some 120 miles from Spurn Head, observed a small vessel immediately ahead on the starboard tack, no lights visible. Put engines astern and ported helm but before way was off her, struck the schooner amidships port side cutting into her about four feet. The schooner was the Norwegian HAABET of BROVIG, out of Newcastle for Nariaga, cargo coals. The master of the schooner jumped onboard the trawler, the crewman who had been at the helm shouted to the mate and AB below deck and started to launch the boat, but the schooner foundered in eight to ten minutes, and all three men were left in the water. Hearing shouts, the boat was launched and the helmsman was picked up from the water and a search was made in the area for two and a half hours for the other two men but to no avail.
9.3.1888: Arrived Hull and landed survivors.
23.3.1888: At the BoT formal Investigation (No.3498) held at Hull the Court found the third hand of the TALIFOO, in default but the master in no respect to blame.
21.4.1889: At Hull landed captain and crew of the Danish schooner CARL EMIL. The schooner had left a Swedish port for West Hartlepool on 13.4 with a cargo of pit props and experienced a strong N breeze initially but on 19.4 a gale sprang up from the SW and labouring she started to take in water and later was dismasted. Signals of distress were hoisted and the TALIFOO responded taking off the crew. 20.4.1892: Reported the death of a crewman Joseph Ketley (25) of Hull. On a North Sea trip, whilst assisting to heave the gear and guiding the warp with a tackle on the drum of the winch, Ketley’s foot caught between the tackle block and the winch and he was dragged with the warp under the winch. The winch was stopped but Ketley, with the lower part of his body badly mutilated he was already dead. 1893?: Fishing from Fleetwood, catches sent by rail to Manchester and Liverpool Wholesale Fish Markets.
31.10.1894: Sailed Fleetwood for North Shields (Sk. John Dier); nine hands all told.
2.11.1894: At about 2.00am. in very hazy weather and thick rain, Ardnamurchan Point Light was made and vessel steamed towards it until the light was ESE. The course was then altered to NNE and continued until the light bore SE. No attempt was made to take a bearing and plot the position. At about 3.33am. vessel was heaved to until daylight with engines stopped and under plain sail with a heading SW to WSW. Wind was blowing strong from the south. The light was astern at a distance judged to be five to seven miles. It was expected the vessel would drift to the NW. At 3.40am. the skipper left the deck leaving orders to be called when when the light bore S or SbyE. At 5.00am the skipper was called and found the light S and the vessel had drifted NE and not NW. Engines were started half ahead and vessel kept on a WNW course but by 6.00am. the light was lost and the vessel was again hove to heading to the SW. At 6.30am. land was sighted astern just off the quarter at a distance of 1 to 11/2 miles. The skipper assumed that the island was Rum and putting the helm hard up steamed for what he thought was Canna Sound. The island was Muck and the vessel was attempting to steam between the island and the Horse Rocks which are connected by a ridge of rocks covered at high water. At 8 – 81/2 knots the vessel struck the ridge and came fast. At low water examination showed that the keel was broken and three blades of the propeller was missing.
3.11.1894: At 3.00pm. the weather started to deteriorate and the crew was taken off by a local boat.
5.11.1894: Following high winds and breaking seas the vessel had become a total wreck.
21.11.1894: Hull registry closed “Wrecked”.
29.11.1894: Reported that the Salvage Association had purchased the wreck.
30.11.1894: At the BoT formal Investigation (S93) held at Liverpool the court found that “The stranding of the vessel was due to the neglect of the master to verify his position off Ardnamurchan Point, and to use the lead; the Court is also of opinion that the master was not warranted in assuming that he had made the distance from Ardnamurchan Point to the island of Rum by 7.00am. considering the way in which the vessel had been navigated during the night. The subsequent loss of the vessel was due to heavy weather.” The skipper, John Dier was in default, and the Court suspended his certificate for six months.
Note. With the advent of the steam trawlers, the Talifoo built for Mr George Beeching, about 1885, was the first of the present kind – it is easier to battle against storms and loss of life has been reduced to as nearly the minimum as possible, and what is vital importance, inhumanity was buried with the birth of the steam trawler.

Note: With the advent of the steam trawlers, the TALIFOO built for Mr George Beeching, about 1885, was the first of the present kind – it is easier to battle against storms and loss of life has been reduced to as nearly the minimum as possible, and what is vital importance, inhumanity was buried with the birth of the steam trawler. 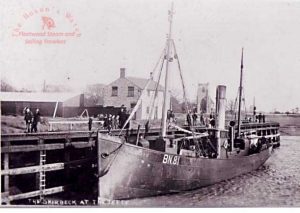 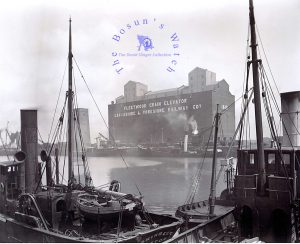 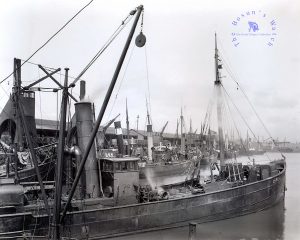