1867: Completed by Fredrickson & Fawcett, Burton upon Strather for F. A. Castle, Grimsby (Castle & Co) as YARRA YARRA.
17.10.1867: Registered at Grimsby (GY252).
14.12.1867: Reported that in the storms of late, some seventy to eighty smacks sailing from Hull and Grimsby were overtaken by the gales. At least two foundered and over fifty suffered more or less damage and loss; whilst ten or more have escaped with scarcely ‘a scratch’, among them the YARRA YARRA.
3.1869: Reregistered at Grimsby (GY22).
9.9.1869: An important sale of ten fishing smacks belonging to Castle & Co, Grimsby was held in the Fish Dock. The attendance was large but the competition was anything but spirited. All were well appointed and fitted out ready for sea. Among them the YARRA YARRA made £615 and was knocked down to Mr Henry Knott, Grimsby.
9.1969: Registered to Edwin Goodfellow, 131 Orwell Street (owner/skipper) and Henry Knott, both Grimsby.
31.10.1871: When, with other smacks, towing out to sea from Grimsby came in contact with the Lancaster registered smack OTTER and received damage amounting to £10.
1.10.1875: On return to Grimsby (Sk. Payne), reported that whilst at sea a boy was washed overboard and lost.
21.10.1875: While on fishing cruise halted by very bad weather, sighted the Dutch schooner ANTON en JACOB (74rdg tons/1854) on the Dogger Bank flying signals of distress, having lost her foremast, deck cargo of wood and bulwarks carried away. Closed and spoke with her and rendered considerable assistance by taking off the master, cook and mate and transferring them to a steamer near at hand. Left three hands onboard and stood off. Later a Yarmouth smack came on the scene and transferred one man onto the schooner and took off remaining crew. The Hull smack JOSEPH and FANNY (H??) having given up fishing in consequence of the weather also noticed the schooner in distress but did not see either the YARRA YARRA or the Yarmouth smack. Asked to standby and supply food.
22.10.1875: At day break boarded the schooner and agreed with the Grimsby men to tow the derelict into Hull. In the afternoon, some 85 miles from the Humber, connected and commenced tow. Weather conditions poor in the aftermath of the gales.
23.10.1875: Delivered the schooner safely to Hull.
25.11.1875: At the County Court of Yorkshire, Hull, the Judge awarded the JOSEPH and FANNY £160 for the salvage and £40 for loss of fish, the YARRA YARRA, £45 for the service and £50 for loss of fish; the Yarmouth fisherman had already accepted £12.
20.6.1876: At the Admiralty court an appeal was heard concerning the award of salvage given in the County Court of Yorkshire. The ANTON en JACOB was judged to be worth £560 The awards were reduced, JOSEPH and FANNY, by £75 making £125 and the YARRA YARRA by £25 making £70. Respondents ordered to pay £30 for cost of appeal.
1881: Census at Grimsby – Edwin Goodfellow (41), b-Barking, Essex, master & owner; George Terusher (23), b-Norwood, Surrey, mate; Francis Gudgeon (18), b-Wapping, Essex, third hand fisherman; John Needham (21), b-Alford, Lincolnshire, fourth hand fisherman; Robert Ireland (45), b-Flamborough, Yorkshire, fifth hand fisherman.
1.1.1883: Owned by Robert Sinclair, 23 Albert Terrace, New Clee, Lincolnshire.
1.1885: Sold to William Hall, Augusta Street, Bargate, Grimsby.
5.1887: Sold to The Great Grimsby Fish & Steam Trawling Co Ltd, Grimsby. (Sk. W. Saylor)).
9.1888: Sold to George E. J. Moody, Abbey Road, Cleethorpes (Walker Moody Kelly, Fleetwood, agent and manager).
23.10.1888: Arrived Fleetwood from Grimsby (Sk. H. Hopkins). To fish out of Fleetwood.
5.11.1888: Alfred Bennett, fisherman, received a nasty wound from the winch handle, which caught him between the eyes and stunned him.
30.1.1889: Fishing out of Ayr. Sailed for the Clyde fishing grounds.
2/3.2.1889: In the very violent westerly gale which raged, accompanied by hail and showers, the smacks which were at sea sought shelter in the nearest port, Ramsey, Whitehaven and Ayr. Driven before the wind put into Campbeltown and anchored safely in the Loch, but owing to weather conditions could not get ashore to telegraph owners.
4.2.1889: In the evening a telegram reached Fleetwood to say all was well.
5.2.1889: Arrived Fleetwood without sustaining any further damage.
9.5.1890: Reported that a beautiful illuminated address had been prepared at the behest of the Fleetwood smack crews and owners for presentation to the Rev.W. Morris MA, vicar of St. Olave’s, Ramsey, who had treated them so kindly and entertained them a few months ago when storm bound in the port and on other occasions when they sought refuge in the Isle of Man.
19.8.1890: Reported sold to John H. Campbell, 12 Charles Street, Greenock and Mrs J. W. Campbell, 51 Brisbane Street, Greenock. John H. Campbell, 12 Charles Street, Greenock designated manager. Grimsby registry closed. Registered at Greenock. Coasting.
5.5.1898: At Greenock Police Courts, Donald Gillespie (12) was admonished for going onboard the smack without the consent of the owner.
1905: Laid up at Greenock. Greenock registry closed.
13.7.1906: For sale, at once, old YARRA YARRA as she lies at Customhouse Quay. No reasonable offer refused. Apply D. M. M’Dougall, 26 Ann Street.
16.7.1906: Same advertisement appeared again in the Greenock Telegraph and Clyde Shipping Gazette.
26.7.1906: Reported that the YARRA YARRA which was deemed unsafe to take to the North Sea, is now being broken up in the West Harbour, Greenock.
9.8.1906: Reported that the YARRA YARRA which has been berthed at Battery Park, Cardwell Bay is gradually being broken up for firewood. Her deck has now been grounded.

1873: Completed by ??, St. Ives as SPRAY.
1874: Owned by Isaac M. Sibbald, Morecambe.
18.5.1874: Registered at Lancaster.
18.5.1874: Appropriated.
4.11.1875: At Whitehaven in company with AMETHYST (FD107), CONFIDENCE (FD121) and PETREL (FD59). Attempted to leave harbour. Informed by Mr Dawson, collector of dues, that they could not leave until harbour dues paid. As they refused to pay, the harbour tug was moored across the entrance to prevent them leaving. CONFIDENCE and PETREL skippers decided to pay, but AMETHYST and SPRAY continued their attempt to leave, one of the crew of SPRAY cut the tug’s head ropes and AMETHYST fell foul of the tug, smashing her boat. AMETHYST and SPRAY boarded by harbour master and mainsails confiscated.
6.11.1875: Skippers attended at the office of the solicitors to the Harbour Trustees and consented to pay all dues, damages and costs. Sails returned and allowed to sail.
1.1.1880: Owned by William Hudson, Fleetwood. Registered at Fleetwood (FD147).
1.1.1888: Owned by Mrs Margaret Hudson, 48 Warren Street, Fleetwood.
1.1.1889: Owned by James Armour, Adelaide Street, Fleetwood (managing owner).
6.11.1890: In SSE force 8 gale, seeking shelter and beating up the Wyre channel (Sk. David Cawell), when near the Knottspit Buoy, in going about missed stays. An attempt was made to wear ship, but this failed and about 6.30pm she was carried on to a bank on the east side of the channel. The sea was very rough and with the gale force wind, the situation was critical for the crew of four.
8.11.1890: At low water about 3.00am the fishermen, with the exception of the skipper, left the smack and walking across the sands to reach Knott End. The skipper had remained behind to fasten up the cabin and in trying to catch up with his crew he unfortunately got into the Knott Gulf. The tide was flowing at the time and he was unsure whether to return to the smack. Fortunately he decided to make a long detour to eastward and reached the shore. From Fleetwood the smack was seen to be submerged all but for her mast and there was concern for the safety of the crew. At about 8.00am three ferry men and three fishermen took one of the ferries across to Knott End and found the crew safe in the Bourne Hotel. The boat returned across the Wyre with the crew and received a hearty welcome from the assembled crowd. In the afternoon James Armour accompanied by fourteen fishermen and two carts went out to the smack and saw that she was already about eight feet deep in the sands. All loose gear, such as sails, ropes etc was brought ashore.
9.11.1890: Having dug out around her and removed all the ballast with the incoming tide she came afloat, but gradually sank again and it was discovered that she was holed.
12.11.1890: A further attempt to salve the smack was made but the tow rope parted and the attempt was abandoned. The SPRAY was valued at £400 and was insured. Fleetwood registry closed. 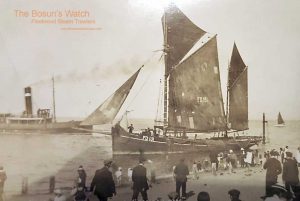