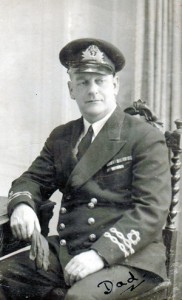 The association of the READER family with the fishing industry started with a Stephen READER who was born in Broadstairs, Kent on the 17th of November 1830 but moved to Scarborough in Yorkshire and became a fisherman. He married Helen PEART and they had thirteen children. Of those that survived childhood the sons became fishermen and the daughters married fishermen or boat builders!

John READER married Esther Elizabeth SHAW on the 17th of August 1875. They had two sons who were both born in Scarborough and lived in Fleetwood as fishermen.

Stephen Peart READER married Margaret GORE; they had eleven children that lived, five sons and six daughters all born in Fleetwood. All five sons were fishermen and held skippers certificates.

Daniel George READER died when the steam trawler “Briarlyn” (ex “Patrick Cullen”) FD 220 which was owned by the Hewitt Fishing Company was sunk on the 13th of February 1928 off St. Kilda.

John Arthur READER was a Mate and held a skipper’s ticket he married Janet FYALL in 1929. They had four sons and two daughters all born in Fleetwood.

Stephen Herbert READER born in 1907 married Marjorie Irene KING in 1929. They had three sons and three daughters, all were born in Fleetwood.

William G. READER born in 1934 was a trawler skipper.

Michael READER born in 1945 was a fitter at Marr’s Fishing Company.

Stephen Herbert READER was the skipper of the steam trawler the “Agnes Whickfield” FD 32 out of Fleetwood.

William R. READER was drowned at sea while serving as Mate of the steam trawler “Navena” on the 27th of July 1946.

Henry READER born 14th of October 1912 at Fleetwood was a fisherman all his life. In World War 2 he joined the Royal Naval Reserve as an officer. Henry READER was skipper of M.V. Wyre Conqueror FD187 after WW 2.

John William READER was born on the 27th of April 1879 He was a fisherman and in World War 1 served in the Royal Navy Reserve onboard Minesweepers. He married Margaret Jane CORLETT in St. John’s Church, Liverpool in 1897. They had two sons and two daughters.

John Richard Corlett READER was born on the 5th of August 1900. Stephen Robert READER born on the 24th of March 1903 was a blacksmith’s striker at J. Marr and Son Ltd.

John Richard Corlett READER born on the 5th of August 1900 married Ellen PORTER they had two daughters and two sons all born in Fleetwood In World War 1 John Richard Corlett READER was a seaman in the Royal Navy on minesweepers. After the War he was Bosun on the “Lizzie Melling” PN 45.
Circa 1938 skipper of the “Alonzo” H887.
Circa 1939 skipper of the steam trawler the ” Norene Mary”.

After the Second World War he moved to Lowestoft and became skipper of one of Boston Trawlers Ltd. diesel trawlers the “Lowestoft Lady “LT 247. On Saturday the 4th of February 1956 “Lowestoft Lady” starred in the B.B.C. Television programme “Saturday-Night Out – Goes to Sea”. Robert Beatty reported on the fishermen of Lowestoft, with Bob Danvers-Walker on board at sea.