The seagoing gene seems to run deeply in the Hobbs’ family. Fred’s father stowed away on a cattle boat from Dublin and made his way to Fleetwood. He later became Chief Engineer on CEVIC and was aboard her when she was lost at Ballure, South Ramsey.

In later life he went on to become 2nd engineer in ISER and chief in the TRANQUIL. On one occasion, after getting the sack from ISER, the shore engineer (Sam Butler) had to call him out and reinstate him as no-one else could get her to fire up.

Fred recalls that, as chief, his father was not a man to allow his fireman to sleep at the Fisherman’s Mission, instead he brought them home where they slept with Fred and his brother Tom. Joe Rice, who was to hold Fleetwood’s record for being a drunk, disorderly and disobedient seaman, was his favourite.

At the outbreak of war, Fred’s father volunteered for the Navy and was accepted immediately and became chief of the minesweeping Lowestoft drifter Mar’e. Later, until his passing, he was on board HATSUSE. Fred still remembers the painful memories generated by fishing with her off St. Kilda.

Brother Joey also went to sea and, at 15, became a fireman. At one time he fired one of Fleetwood’s largest trawlers, ST. LOMAN. Looking for an easier life he joined the RN in 1937 and served until 1949 as second engineer and chief, ending with oil rig support vessels until he died in 1976. His last trawler was BOSTON KESTREL.

Brother Tom sailed as brassie on ISER at 14 years old in 1935. After committing the cardinal sin of hitting the skipper (Beck Newton) for swearing at him, his fishing career was over, for a time at least. After this incident he cooled his heels for a while on the Fleetwood to Llandudno paddle steamer ATLANTA. In 1938 he joined the navy as a boy seaman and served in cruisers and destroyers both in the home and Mediterranean fleets. Both Tom and Joey were on the cruiser PHOEBE which was hit at Crete. Tom went on to the destroyer LANCE which was bombed and sunk at Malta. As if that weren’t enough, he was on WARSPITE when she was damaged at the Salerno and Anzio. He was still aboard when she was hit on D-Day.

The end of the war saw Tom off to the Med once more, this time with the Naval Police in Taranto. His naval career finished on the trawlerSTEEPHOLM in 1947. Returning home he managed to get back into fishing as a fireman, mostly in the ‘Duck’ boats where he gained the reputation as one of Fleetwood’s cleanest firemen.

His fishing days ended as second engineer and chief, sailing for Wyre Trawlers and Hewetts, indeed, he was in ELLA HEWETT when she was struck the wreck of the torpedoed WW1 cruiser HMS DRAKE, and sank in Church Bay, Rathlin. As with many Fleetwood fishermen, the cod wars forced him into oil rig support work. Tom passed away in 1991 after a short illness.

Fred remembers asking Tom why, after 8 years in the navy as a seaman, he wanted to go as a fireman. His reply was that -…it’s too bloody cold on deck-. Yet, at Iceland aboard WYRE GENERAL, he would take the trouble to cross the foredeck to the foc’sle to bring Fred a pot of tea at hauling time. He also taught Fred the ‘rules of the road’ as well as how to splice wire and rope, in the engine room of WYRE GENERAL.

Fred Hobbs in the Fishermens Club

Fred sailed with Bobby Nash in RED DRAGON and was with him when a sea took out the bridge windows off the Norwegian Coast. Fred also sailed in RED ROSE and is the author of an article that was published in ‘Life In Fleetwood’ in 1992.

Fred Hobbs started trawling relatively late in life at the ripe old age of 19 when he left the RN and signed on COTSMUIR as half deckie with Freddie Slapp. At the time the Cotsmuir’s bosun was Freddie’s 16 year old son.

With Fred being familiar with the sea and ships, some ship’s husband’s would have considered that sufficient to sign him on as deckie but Fred’s brother Tom insisted that he “Knew nowt” so he was signed on as half deckie, with the probability that he would make three quarters the second trip and full deckie the third if he was with a good crew who could cover for any shortcomings until he was totally familiar with the job.

Due to bad weather it took a week to get COTSMUIR to sea for the first trip. Everytime the crew turned out the ship’s runner waved them away. Eventually though, and despite the weather, COTSMUIR sailed and Fred was on his way to what he describes as ” A great life with good money”

After one more trip Fred sailed in EASTCOATES, with Jack Wilson, for a trip to St Kilda as full deckie. He was soon of the opinion, though, after having to swap sides due to a busted trawl, that he wasn’t quite ready so he went back as three quarters.

With a few trips under his belt Fred signed on AGNES WICKFIELD with skipper Steve Reader and bosun Tom Ellerby. He recalls that “She was one of only 2 trawlers fitted with sirens so that all Fleetwood knew when old ‘AGGIE’ was around, she sounded like a destroyer”. Tom Ellerby taught Fred a lot and he was signed on as full deckie for his second trip after another deckie had been downgraded.

After four trips with Steve and many boxes of whiting later, Fred was Iceland bound aboard UNITIA with skipper Harold Harrison, mate Chris Porter and bosun, Judder Harrison. The weather was bad but the fishing was good so sleep was a commodity that was in short supply and it was a case of catching a catnap whenever possible. A worse initiation to Icelandic fishing could not have been imagined as eight out of the ten deckies that UNITIA carried had never been to Iceland before and Fred was an ‘Old Timer’ compared to most of them. The unfortunate runner that had signed them on had imprecations heaped upon him from all sides. At the end of the trip they all got the sack 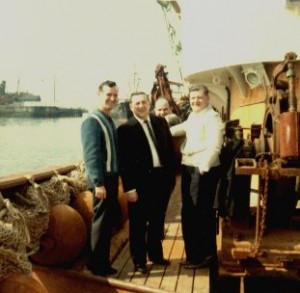 Soon after Fred was with Johnny Green and Sammy Archer in CYELSE when she ran aground at Wyre Light, after an easy trip, in thick fog. Sammy advised Fred “Bad omen that, better get out”. Subsequently they both signed off and, shortly afterwards, she was lost without loss of life. Sammy always took credit for saving Fred’s life. “Got you out of that one just in time”, he was fond of saying.

Fred sailed with Billy Lane, homewater fishing, and George Elliot, Iceland, (who he describes as two of the best) in MARGARET WICKS and ROBERT HEWETT. Both men had regular crewmen who had sailed with them since WW1. Fred blotted his copybook with George Elliot by signing off the trip before George was due to pick up ELLA HEWETT. Fred says ” I was treated like I’d refused a pools win” and he knew that he’d be banished to ‘Under Gourocks Canopy’ a phrase well known to Fleetwood fishermen. If you were under the canopy you were either on leave, sick or banished for some wrongdoing.

The worst of the large trawlers that he sailed in was NEW PRINCE, (ex- CAPE BARRACOUTA). She was nicknamed the SALT WATER RINSE or CAPE WATER SCOOPER due to her sailing like a yacht in the Guiness yacht races. An hour on the wheel left the helmsman with sore sides. The deckies confronted the skipper over the seaworthiness of the vessel and declared that “Your ship has moved its boiler and we all want to go home”. The skipper declared that they could all “Sign off after you’ve stowed the gear, got the doors inboard and stowed the deckboards.”

After they complied the trawler ran into Vestmanneyar where a marine insurance surveyor examined her and declared her seaworthy. After that they decided to give her another chance but couldn’t wait to get off her. Norman Jinks was mate and the bosun was a Jinks also. Fred had several trips when they got absolutley ‘battered’ and never got to the point of saying “She’ll be alright”. Fred recalls that ” RED DRAGON, WYRE MONITOR, and RED PLUME were all noted for ‘laying over’ but it was far from natural behaviour for a trawler and was most dangerous, leaving the vessel seconds from running under.

Fred’s favourite trawler was RED KNIGHT under John Tomlinson. She was the last word in luxury for the times and she rode the worst of the weather well. It was aboard her that the most atrocious conditions that Fred ever saw were encountered and RED KNIGHT had to be escorted into Seydisfjiord by the LOCH FOYLE and LORD LLOYD, after 52 hours of 114 mile an hour winds that blew the seas flat.

It was the same time that ST. JUST had her aluminum bridge stove in. RED KNIGHT’s was made of steel and it was gutted. The radio room was wrecked, bridge doors gone and every handrail on the bow and casing had been wiped off. The food locker was gone and the forecastle was full of water to the top rung of the ladder so all the crew all had to bunk down in the cabin and they could only keep 15 minute watches on the bridge. After 4 days in Seydisfjiord she was patched up for the trip home with plywood shields around the bridge. The crew stayed ashore in a ‘Host House’ while they got the forecastle dried out and cleaned. The trip was terminated while they sailed home for repairs but they did stop off at the Faroes for a while and so avoided coming home with empty holds. The crew were praised by Captain Lawford for their efforts who contributed a bit extra to their pay. RED KNIGHT never even made the news, the papers were too full of the damage to ST JUST.

Fred’s favourite skipper was Harry Farrar (who he describes as a true seaman) and Nikki Wright (a gentleman fisherman). Harry once told Fred to “Get yourself one of these wooden sou’westers (a skipper’s ticket or the bridge), and you’ll find that the job is quite bearable. Meanwhile, get yer arse on that deck and we’ll see if we can get that trawl up”

“That”, says Fred, “was the very same night that HILDINA towed herself under in a following sea with the loss of six of her crew”. Calling the mate out Fred said ” Would you believe that he’s going to haul in this?” Chy Palmer replied “The man has no fear, we’ll both sign off for Christmas”, (which we both did) 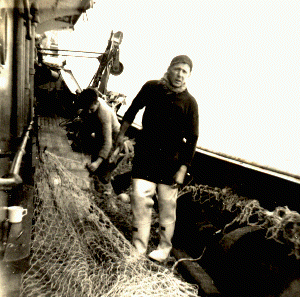 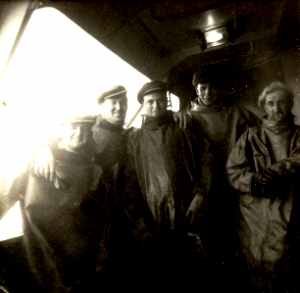 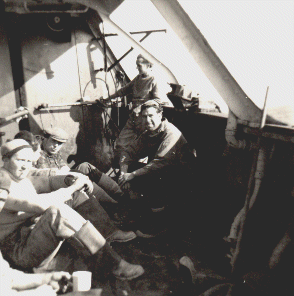 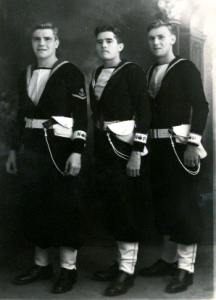