The final story of the JÓN STEINGRÍMSSON ended up being extremely complicated, and was only resolved 12 years after the ship was scrapped, when the Icelandic Supreme Court rendered the final verdict in the litigations between the owners of the ship.

In late 1951, two of the owners (BERGUR LÁRUSSON and others) had been authorized by the others to sell the ship for scrapping, and the two claimed to have already sold it for scrap to Belgium for 250.000 krónur, when the owners of mv. ÞORSTEINN AK 7 (Ásmundur hf, Akranes), were given a lien on the ship as security for the compensation awarded by the court, (which was “in solidum“ responsibility of all the owners).
The JÓN STEINGRÍMSSON RE 231 was handed to Ásmundur hf as part of the compensation, and Ásmundur hf sold the ship for scrap.
This change of ownership is not noted in the synopsis of the registry printed in the standard reference ÍSLENSK SKIP.
However, the company that had insured the JÓN STEINGRÍMSSON paid out 400.000 krónur to the two accredited owners. They shared 250.000 krónur with the other owners but kept 150.000 krónur. It was about these 150.000 krónur that the protracted litigation centered. The two alleged that they had had to incur the extra cost of 150.000 to acquire the HAUKANES (CW&G Yd.No.424) in order to honour the Belgian contract. (They eventually lost the case.) 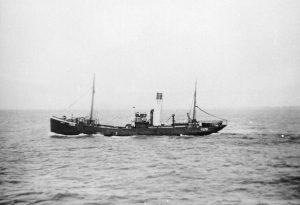