“In Fleetwood as in other fishing ports, a close link was developed between the trawler owners and the collieries supplying the steam coal, in this instance from the Lancashire and West Yorkshire coalfields. From the start of the steam trawling era, coal from Duxbury Park Colliery and Ellerbeck Colliery, Adlington – only 30 miles from Fleetwood; Orrell Colliery, Wigan and Westleigh Colliery, Leigh was in regular supply and in 1904 the colliery agent for Adlington Coal Company, Chorley took a major shareholding in the steam trawler CITY OF YORK (FD16).

The Clifton Steam Trawlers Ltd had their own rail wagons and used them to advertise with the slogan “Fleetwood Fish” and when BDSF&I Co moved to the port it was not long before they too had their own railway wagons transporting coal mined by the Earl Fitzwilliam’s Collieries at their Elsecar Main pit at Barnsley.

The Great Grimsby Coal Salt & Tanning Co Ltd also had their own private user wagons and supplied bunker coal at all the major fishing ports.

The firing of the boiler in a steam trawler, demanded physical strength and stamina from the firemen and there was no room for poor quality coal, although this sometimes had to be taken when fishing Iceland or the Faeroe Islands in the early days, when insufficient coal could be carried for the trip. Firemen became familiar with the quality of coal from particular collieries, although, like railway locomotives, it was not unusual for sister ships to have widely varied coal consumption and steaming characteristics.

In all steam plants a certain amount of water is lost on each cycle, raising steam, driving the engine and returning to the boiler via the condenser, due in the main to steam leaks. Many older trawlers used sea water in the boiler as make up feed water and this was acceptable so long as the boilers were regularly blown down and scaled. When water tube boilers were introduced however, this lead to corrosion and the tankage of make-up feed water was increased. The bunker capacity, feed water, potable (drinking) water and ice storage for the three Admiralty trawler types, typical of the vessels built pre and post WW1 was:- 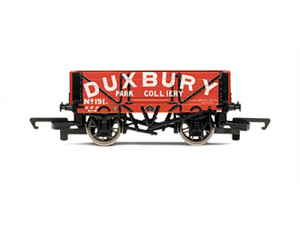 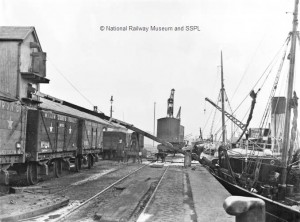 Coal wagons on the dockside 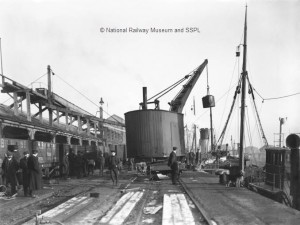