1876: Completed by J. W. & A. Upham, Brixham for Mrs Hannah Thompson Tyrer, Charles T. Adams, Elizabeth Edwards and Joseph Perrett, Brixham. as TALISMAN.
6.4.1876: Registered at Dartmouth (DH200).
1.1.1883: Owned by Frederick George Perrett, Brixham.
2.7.1885: At Paignton Petty Sessions, fisherman apprentice William Blackler was charged with assaulting and disobeying the master and owner Frederick G. Perrett while engaged in the North Sea fishery. The defendant had been disobedient, refusing to take in sail when ordered and destroyed clothing, threatening to give the skipper a “hiding”. With lack of corroborating evidence the case was dismissed with a caution.
21.10.1885: Off Berry Head dismasted. Picked up by sailing trawler PETO (DH923 later BM923) and delivered safely to Brixham.
23.2.1887: Arrived Brixham along with sailing trawler MYSTERY (DH186) and reported loss of all fishing gear caused by coming fast on a wreck.
By 27.4.1887: Sailed Brixham for North Sea fishing.
9.1890: Sold to Walker Moody Kelly, Fleetwood.
26.9.1890: Brixham registry closed.
1.10.1890: Registered at Fleetwood (FD76).
7.11.1890: Following on from the bad weather in October, the storms of early November caused considerable damage on the Fylde Coast with many ships in distress and concern for the Fleetwood fishing fleet.
8.11.1890: By early forenoon all the fleet had returned home, in most cases with minor damage to sails and spars with the exception of the dandy EDWARD & SOPHIA (FD48). Between 9.00 – 10.00am, with a search party onboard, sailed from Fleetwood to search the Bay for the missing trawler. The EDWARD & SOPHIA having caused some concern as to her safety returned home after dark with similar damage and all crew safe. Returned home.
30.9.1892: In boisterous weather took part in Fleetwood Regatta on a 45 mile course, placed third (£7 10s) and won by LIVONIA (FD65) (£25).
6.5.1898: Sold to Jón Jörgen Christen Havsteen, Akureyri, Iceland.
5.1898: Fleetwood registry closed. Used for hand lining with crew of 15-18 men.
1903: Registered at Akureyri as (EA23).
1917: Sold to Ásgeir Pétursson, shipowner, herring curer, and merchant, Akureyri.
1917: Fitted with 40 ha 4-stroke hot bulb kerosene engine by Hein, Denmark.
24.03. 1922: Wrecked at Sauðanes, (Western fiords of Iceland) when bound to the south of Iceland for the seasonal cod fishery. Eight out of a crew of sixteen got ashore, but four of them died of exposure before reaching shelter at Flateyri in Önundarfjörður. Akureyri registry closed.
Click to enlarge image 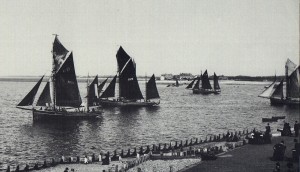