7.2.1883: Launched by J.W. & A. Upham, Brixham for James Small, Brixham as FLEETWING.
1883: Completed. Registered at Dartmouth (DH214).
27.7.1889: Arrived Fleetwood from Brixham.
3.8.1889: Sold to Mrs Jane Waring, Fleetwood & others.
12.1889: Dartmouth registry closed.
9.12.1889: Registered at Fleetwood (FD63).
6.1.1890: For over a month the weather had been unfavourable for trawling and Fleetwood fishermen had earned nothing. Put to sea in company with YOUNG WALKER (FD47).
7.1.1890: Returned with the punt and bulwarks smashed with heavy seas and YOUNG WALKER having lost the trawl beam and broken her bridle. What little fish they caught was sold at – soles 1s 5d per lb, rays 6s a basket and plaice 4s per score.
13.1.1890: Many of the Fleetwood fishing fleet sailed for the fishing grounds off the Isle of Man, but several of them returned to port, not deeming it advisable to remain out. Amongst those that stayed out, ROYAL CONSORT (FD75), SURPRISE (FD151), PRINCE CHARLIE (FD157), GRATITUDE (FD156), FLEETWING (FD63), GEORGE & LIZZIE (FD91), SWALLOW (AR89) and GRACE DARLING (FD113) and ELIZA CHARLOTTE (FD17) belonging to Mr C. H. Saundby, were caught in the gale which blew up later in the day and raged until early the following morning. In the heavy seas broke the jib boom. SURPRISE encountered the worst of the weather and lost fisherman William Jackson (18), washed overboard and later, north of Maughold Head, missed stays and was swept on the beach. Being on the flood she came afloat to her anchor and volunteers brought her into Ramsey, the last Fleetwood boat to arrive. ROYAL CONSORT sustained the most damage, her main gaff was broken and the mizzen peak halyards parted; she was the last but one to arrive in Ramsey. GRACE DARLING lost all her sails blown away and other damage to her rigging. ELIZA CHARLOTTE and GEORGE & LIZZIE had their mainsails entirely blown away, while SWALLOW lost her foresail. All these boats managed to get into Ramsey and await better weather, those with sails blown away to wait until fresh sails were sent from Fleetwood.
15.1.1890: Mr Saundby despatched the smack ROYAL CONSORT (FD23) to Ramsey with new suite of sails to enable the damaged smacks to return to Fleetwood.
25.10.1890: Taking advantage of a favourable breeze some thirty smacks left for the fishing grounds. The Harbour Authorities were constructing a groyne near the Lower Shore Light with piles driven in. Along with WONDER (FD68), ROBERT & ANN (FD98) and YOUNG WALKER (FD47) ran amongst the piles. Drove one or two piles down but was holed and had to put back into harbour with pumps manned.
1891: John Waring, Fleetwood & others (John Waring managing owner).
30.9.1892: In boisterous weather took part in Fleetwood Regatta on a 45 mile course, which was won by LIVONIA (FD65).
17.5.1904: Tonnage altered to 24.26net. New Fishing Certificate issued.
20.12.1904: Sold to Frank Jones, 16 Ferndale Rd, Hoylake.
6.1.1913: Sailed Liverpool for Welsh fishing grounds (Sk. Frank Jones); four crew all told 9.1.1913: At night in fairly clear weather but a strong SE wind and choppy sea, returning to Liverpool from Gt. Orme’s Head having broken the trawl beam. Shortly after 5.00pm while beating up the Crosby channel on the port tack they saw the lights of a small steamer astern, some distance away. Having just stayed up (gone about) and set on the starboard tack they observed the steamer about 300 yards away on the port quarter. The skipper shouted out to the steamer, “What are you doing aboard that ship? You are coming into us.”. The steamer, which proved to be the Mersey Docks & Harbour Board steam hopper barge BETA (404grt/1891)(Capt. Griffiths), ported her helm, slowed down and then went full astern, the master shouting to the trawler ”What kind of a thing is that to do?”. Immediately afterwards the hopper struck the trawler on the port side, midships. The trawler started to founder and two of the trawler’s crew jumped into the punt, which floated clear and got on to the hopper where they found the other two members of the crew. The trawler filled and started to settle and then the saloon lights of a large steamer was seen close by, Capt Griffiths sounded blasts on the whistle that they were going astern. Before the hopper made way astern she was struck on the port side at the break of the forecastle by the Booth Steamship Co Ltd liner AMBROSE (4585grt/1903)(Capt Poulet), Manaus for Liverpool, rubber and passengers, opening her up and taking in water. The force of the impact threw a good many of the men on the hopper into the water and others lowered the boat which got jammed throwing the occupants also into the water. At the time inbound was also the Northwich Carrying Co’s steam coaster MAY (263g/1903) (Capt Owens) which came upon the scene and succeeded in picking up fisherman Frederick Jones; Capt Griffiths and Samuel Fryer of the BETA and Harry Evans, White Star pilot, returning to Liverpool after piloting the SUEVIC (12531g/1901) out of port. On account of his critical condition Capt Griffiths was taken onboard the AMBROSE for medical attention but died before reaching Liverpool. The AMBROSE had lowered her boats to pick up survivors but before anymore could be saved the hopper foundered by the head; there was no sign of the waterlogged trawler or any men in the water. The remaining three survivors were brought up to the landing stage onboard the MAY and pilot Evans was at once taken to the receiving house and attended there. The whole incident had taken place over a few minutes and although the New Brighton steam lifeboat proceeded to the area they arrived after the incident was closed.
20.1.1913: Fleetwood registry closed “ Vessel in collision in Mersey January 9th 1913 and was totally lost. “ Subsequently salved and broken up. 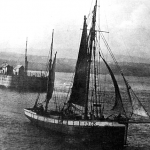