17.9.1891: Launched by Mackie & Thomson, Glasgow (Yd.No.37) for The British Steam Trawling Co Ltd, Hull as SCORPION.
6.10.1891: Registered at Hull (H166).
10.1891: Completed (William L. Robins, manager).
7.2.1893: On the North Sea fishing grounds, towing the starboard gear on a heading SbyW. Mate, Rowlands, in charge of watch with James Mathews, deckhand, as lookout; mate was asleep. Look out observed the Hull smack GARNETT BROTHERS (H1390) with gear down towing in a Northerly direction, he saw the smack’s light fall but did either alter course or rouse the mate. When a collision was inevitable Mathews woke the mate by shouting “Man overboard”. The mate ran to the wheel, but too late to alter course and rang the telegraph for full speed astern, but before stern way was on her she struck the smack. Severely damaged the GARNETT BROTHERS started to settle and crew was taken onboard before the smack foundered.
3.3.1893: At BOT formal inquiry held at Hull, the Court found that the collision was due to the SCORPION having failed to comply with article 17 of the Regulations for Preventing Collision at Sea and adjudged that the certificate of the mate, Rowlands, be suspended for twelve months and that of the deckhand, Mathews, be cancelled and to pay £10 towards the cost of the inquiry.
14.2.1899: Arrived Hull following severe storm and landed boatswain with leg broken.
4.7.1899: In the salvage action between the SCORPION and the Danish steamer N. G. PETERSON (1282grt/??) in which the trawler had offered towage services, which were afterwards declined. The master of the steamer had originally intended to employ the SCORPION to tow him to Sunderland, but another vessel took him in tow. The Judge, Mr Justice Bucknill gave judgement in favour of the SCORPION and awarded £150 and costs.
7.1.1905: Outward from Hull for Dogger Bank grounds; nine hands all told. At about 4.30pm. when some 90 miles ENE of Spurn Point, saw a steamer on the port bow. The weather was stormy and a heavy sea was running. At about 5.00pm. distress rockets were seen and the trawler closed the steamer which proved to be the London registered ANNANDALE (1526grt/1878). In response to a hail, the master replied that his rudder was broken and “ could you manage to steer me in”. The skipper of the SCORPION answered “yes” and was told to come in and make fast. After many attempts a line was secured. During the night the wind increased to a heavy gale.
8.1.1905: At 7.30am. Flamborough Head was sighted and they continued on their way with the Hull tug ORION (83grt/1900) assisting. At 9.00pm. the ANNANDALE was delivered to safe anchorage in the Humber.
22.3.1905: In the Admiralty Division of the High Court, London owners of the SCORPION sought salvage money for the incident. In giving judgement, Mr Justice Deane remarked that the ship was able to use her own engine and only required the trawler to steer her and thought the proper reward was £400 for salvage service, £75 for repairs and loss of fishing, making £475 in total.
4.11.1912: Sold to James Alexander Robertson, Fleetwood.
15.11.1912: Hull registry closed.
16.11.1912: Registered at Fleetwood (FD165).
7.12.1912: Sold to The Lancashire Steam Fishing Co Ltd, Fleetwood (James A. Robertson, manager).
2.1913: Sold to Charles James Smith, Scarborough.
25.2.1913: Fleetwood registry closed.
26.2.1913: Registered at Scarborough (SH182). James Johnson appointed manager.
9.5.1913: Sold to Dogger Bank Steam Trawling Co Ltd, Scarborough. Richard W. Crawford appointed manager.
1.1.1914: Tonnage altered to 63.71 net under provision of Merchant Shipping Act 1907.
4.6.1917: Sold to Dixon Chew, Scarborough (trading as Scorpion Steam Trawling Co). Dixon Chew designated managing owner.
29.5.1917: Requisitioned for Fishery Reserve.
22.3.1918: Dyke Steam Trawling Co Ltd, Scarborough registered as a private company with a capital of £9,000 in £1 shares to take over the business of “Scorpion Steam Trawling Co” including the steam trawler SCORPION. Directors are H. Crowther, R. W. Crawford, J. Johnson and J. Scatchard, all Scarborough.
25.11.1918: Sold to George Henry Cambridge, Filey James Johnson, Scarborough appointed manager.
1919: Released.
1919: Fishing out of Lowestoft.
1921: Returned to Scarborough.
1927: Sold for breaking up.
1927: Scarborough registry closed. 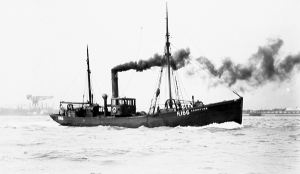