21.,10.1903: Launched by Miss Adela Liver, sister of Mr Arthur T. Liver a director of the builders at Liver & Wilding Ltd, Fleetwood for John Liver (64/64), ‘Brookfield’, Fairhaven, Lytham (64/64) on behalf of a private syndicate. She was christened RELIANCE using a bottle of water from the River Jordan which Mr John Liver had brought back from his travels. Berthed in Wyre Dock by the launch tug Wyre for fitting out .
1903: Completed at a cost of £1,200.
23.11.1903: Registered at Fleetwood (FD210). John David Gibson, 88 York Terrace, Fleetwood designated ship’s husband.
24.11.1903: Shares (16/64) sold to John David Gibson, Fleetwood.
24.11.1903: John David Gibson, Fleetwood, designated managing owner.
27.11.1903: Shares (8/64) sold to Walter Whittaker, Hill Top, Cheadle Hulme.
7.12.1903: Shares (8/64) each sold to Agnes Liver, Frank John Liver and Herbert James Liver all of ‘Brookfield’, Fairhaven, Lytham.
9.12.1903: Shares (8/64) sold to Arthur Thomas Liver, 158 Dock St, Fleetwood.
1904: Tonnage altered to 20.10 net per Surveyor’s Certificate dated Liverpool 28.5.1904.
11.3.1907: Arthur Thomas Liver designated managing owner.
1917(?) : Arthur T. Liver, 4 Clarendon Road, St. Annes-on-the-Sea designated managing owner.
1925: Sold to Mary Ellen Leadbetter, Fleetwood and others (joint owners 64/64).
1925: Converted to auxiliary motor (60hp semi diesel) Re-measured 9n.
1925: Sold to Thomas W. Dixon (64/64), Holm Lea, Earls Road, Whitehaven (managing owner).
24.11.1925: Fleetwood registry closed. Registered at Whitehaven (WA25).
3.1947: Sold to Mr & Mrs William Frank Davison for conversion to a yacht. Along side at Jubilee Quay fitting out for a voyage to either Canada of West Indies.
17.5.1949: Sailed from Jubilee Quay without notifying the harbour authorities of their intentions. They had only 300 galls of fuel onboard and a local skipper who had spoken to them thought they were undermanned for a voyage to Canada.
18.5.1949: An officer from Manchester registrar’s court arrived at Fleetwood with notice of judgement awarded on a £250 debt claim against the Davisons.
27.5.1949: A vessel believed to be the ketch RELIANCE reported anchored between The Brissons and Cape Cornwall. Sennen cove lifeboat (Cox John Roberts) attended to warn the crew that they were anchored in a dangerous position, but assistance was refused and the engine which had seized due to slow running was restarted. At 5.00pm they headed across Mounts Bay. Sighted by Coast Guards at several points along the coast, motoring at about 2 knots, steering erratically. Tried to make for a French port but driven back by strong winds towards Plymouth.
3.6.1949: During darkness and worsening weather, with engine having insufficient power to go against the tide and no sails, driven up Channel and caught in the Portland Race buffeted and swept by seas, went on the rocks at Cave Hole, Portland. Made paraffin flares to attract attention, put on lifejackets and got the raft ready to abandon if necessary. At about 2.00am, when the mainmast went over the side, took to the raft with the intention of paddling down the coast to suitable landfall. A rocket and lights seen from the top of the cliff and seeing what they thought was a lifeboat they tried to attract attention but were carried out a long way. For twelve hours they were in the raft which was swamped continually and in the afternoon nearing the shore, Mr Davison, who had already died, was swept away when the raft over turned. Mrs Davison managed to reach the shore and exhausted, fell asleep.
4.6.1949: On waking Mrs Davison with difficulty got up the cliff side and and was met by the Coastguards who thought there were no survivors.
6.6.1949: The body of Frank Davison (49) recovered among rocks.
14.6.1949: At the Coroner’s Court at Portland a verdict of death by misadventure was recorded on Mr Davison. Evidence showed that he died of heart failure due to exposure and exhaution but that there were no signs of drowning. Wreck investigated by Weymouth salvage team but no hope of getting the vessel off the rocks. Whitehaven registry closed. Total loss. 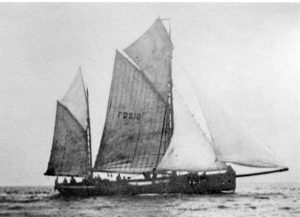 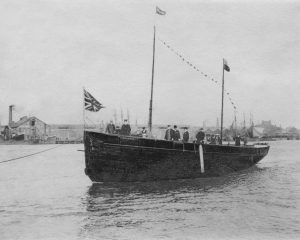 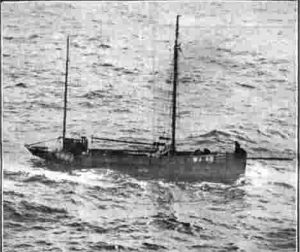 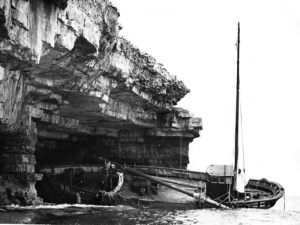