If you have any technical or historical information about this vessel, please contact info@fleetwood-fishing-industry.co.uk

Notes: From Dick Massey
ANNIE was very different in the hull shape to the regular prawners. Some time after the war she was returned to her builders (Crossfields at Arnside), for a complete rebuild.
The vessels side planking was raised two planks higher, the stern was changed from the traditional low counter stern to a fine cruiser stern, like Scottish seiners.

On deck the layout was the traditional, longish fore deck with the new trawl winch mounted offset to port, forward of the very stout main mast. Most prawners used a capstan instead of a true double drum trawl winch, as now fitted to ANNIE.

The new engine was a Lister Blackstone JP2 of 22 hp. This engine being a real marine engine, had a dry sump.
The sump oil was contained in a separate tank fitted on a shelf on the port side of the engine room. Starting was by hand crank, later an electric start was fitted. The propeller shaft went out on the starboard quarter.

As ANNIE had originally been built for sail, her lights burned oil, later converted to electric. The best mast head lights were reputed to be made from a Rose’s marmalade jar as it had many sides and this gave a better light.

Annie was very modern compared to most of the older vessels being forty feet long, but with a little shelter doghouse just aft of the mast, above the engine. Then a long cockpit to within six feet of the stern.

The trawl was worked on the port side, but when the cod end was lifted aboard with a tackle from the head of the mast, the fish were landed on to the starboard side deck. After the net was shot away again, gutting and the sorting of the fish took place with the crew standing in the cockpit, the gutted fish was sorted in to five stone baskets.

Up until 1978 ANNIE was laid in the dock at Birkenhead in a very neglected state.
To get ANNIE from the Mersey to the Isle of Man, was a problem considering the state she was in, but a fishing vessel the ROS CARBRIE, was employed to carry a cargo of fibre-glass resin to Douglas. So Tank, her skipper, agreed to tow ANNIE for the sum of £100 cash. So my first trip on the vessel was on the end of a rope.
With the ANNIE in Douglas, I was then skipper of the CAIRNGORM, work was commenced to refurbish the old boat again.
The engine was fully overhauled with a new prop shaft and propeller fitted, a new wooden rudder built and fitted and the old large mast was removed and gifted to another old prawner.
Two new masts were fitted, along with an after wheel house. When the work was finished the old boat looked like any other small Scotch fishing vessel.
After the rebuild, she was worked trawling for fish and queenies, scalloping with two four ft. dredges. A hydraulic line hauler was fitted for long lining for dog fish.

In 1980 ANNIE was sold to Mr James Harrington, of Dursey Island, Kilmichael, Bantry , Co Cork.
After the sale I delivered ANNIE back to her old berth at Fleetwood, this was for the new owner to clear customs for the export of the boat, ANNIE was still FD 108.
The old Lister engine pushed ANNIE to her new home, here she laid on a mooring as there was no harbour.
In a bad storm she broke adrift and went ashore, to be smashed up on the rocky shore, when the storm was over all that the owner could find was the long iron keel. 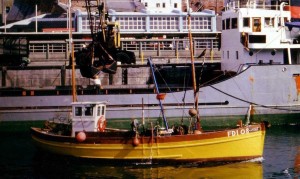 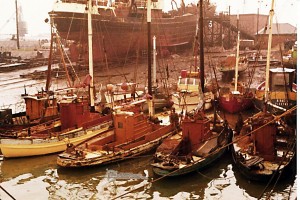