1906: Completed by Société des Ateliers et Chantiers de France, Dunkirk (Yd.No34) for Armand Coppin et Cie, Boulogne as St. Jaean at a cost of 180,000 francs (£7,140)
1906: Registered at Boulogne (B3036). Armand Coppin designated manager.
17.5.1907: Reported that whilst on the Iceland grounds vessel had been ashore and was towed to Reykjavik by the French steam trawler LIBERTÉ.
1914: Requisitioned at Boulogne for war service by Marine Francais as an auxiliary patrol trawler/escort. Attached to 3rd Patrol Squadron Western Mediterranean (Sk. Jean-Marie Grall).
27.4.1918: Following attack on tanker ROMANY (3983grt/1902) by U-boat (UB48 – Wolfgang Steinbauer) some 50 miles SW by W3/4W of Cape Spartivento, Sardinia, shelled and damage by U-boat; three crew including skipper, Jean-Marie Grall, killed.
1919: Returned to owner.
21.2.1923: Put into Penzance to take bunker coal.
1927: New boiler fitted.
2.10.1936: In the evening off Rye Bay (Sk. Victor Lepreto) stopped by sloop HMS Lupin (Cdr H. A. Rowley RN) on Fishery Patrol duties, after initially refusing to stop, making off and shots were fired. Sk. Lepreto was arrested for entering British exclusive fishery limits for a purpose not recognised by international law and fishing within the three mile limit. Brought into Dover.
3.10.1936: At Dover Magistrates Court, Sk. Lepreto told the bench that he was seeking shelter. The weather being fine this was not accepted and he was fined £10 for entering British exclusive fishery limits; the charge of fishing off Rye Bay inside the three mile limit was not proceeded with.
1939: Sold to Pêcheries de la Morinie, Boulogne. Paul Ficheux designated manager.
8.1939: In Fleetwood for repair. At outbreak of war not required by Free French Naval Force (FNFL) or The Admiralty.
1940: Fishing Iceland grounds out of Fleetwood. Boston Deep Sea Fishing & Ice Co Ltd, managing agents.
1.1941: Sk. André Lecoeur ex JOSEPH DUHAMEL became fishing master.
1.5.1943: Typical landing. 1100 kits – cod-650, haddock-300, flats-20, ling & coley-130.
1945: Returned to France.
1946: Sold to Société Dunkerquoise de Remorquage et de Sauvetage, Dunkirk.
1948: Broken up. 1949: Boulogne registry closed.
31.7.1957: An appeal was heard in the Chancery Division of The High Court on behalf of Boston Deep Sea Fishing & Ice Co Ltd against assessments to income tax for 1940-41 and 1944-45 on profits made from operating the St. JEAN out of Fleetwood. The BDSF&I Co Ltd owned 49% of the shares in the trawler owners, Pêcheries de la Morinie, Boulogne-sur-Mer and the profits were paid over to the French company after the war. For the Crown it was argued that the profits were taxable as those of a foreign company carrying on business in the UK through an agent. Mr. Justice Harman held that agency could not exist while France was in enemy occupation. He allowed the appeal with costs against the Crown. 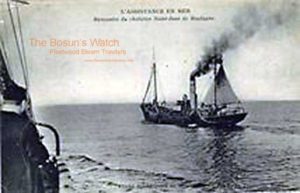 S.T. St-Jean B3036
Picture from the Internet