Notes : Twelve crew scrambled aboard the lifeboat but a bung was missing. Mr Bevan decided there was no time to look for the missing bung, and fearful the vessel was about to sink, he put his hand in the hole to stem the icy water.
It was decided to push off and for two hours they pulled for safety in atrocious conditions. All the time Mr Bevan kept his hands over the open bung hole and was lying in the water at the bottom of the boat.
The crew said later, “I doubt if we would have reached the shore if it had not been for Charlie. He never grumbled after we reached land and we tried to keep him warm with our clothing. But the ordeal had been too much and he died.”
The men had landed less than a mile from a village but were not aware of this until they staggered among the houses some four hours later.
Four men – Skipper Anderton, his brother Tom, the bosun, mate Charles Whiteside and deckhand Frank Duncan stayed aboard the trawler. But in the pitch black with the ship bumping about and being swept by heavy seas Mr Duncan disappeared. He was presumed drowned. 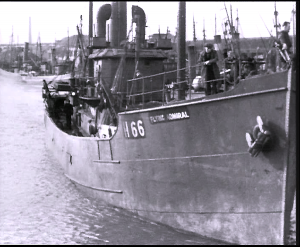