7.9.1914: Launched by Smith’s Dock Co Ltd, Middlesbrough (Yd.No.589) for William Robbens & Sons Ltd, Lowestoft as LOLIST.
13.10.1914: Registered at Lowestoft (LT427).
10.1914: Completed. William Robbens designated manager.
13.2.1915: Fishing from Milford.
29.5.1917: Requisitioned for Fishery Reserve.
18.12.1918: Last landing at Milford.
1919: Released.
2.10.1924: Off Lowestoft in collision with steam drifter PRIDE (LT471) which subsequently foundered. Crew picked up and landed Lowestoft.
1932: Sold to T. B. Bilton & Sons Ltd, North Shields. Robert Bilton designated manager.
14.5.1935: Homeward from the fishing grounds in a strong NE gale (Sk. John C. Anderson), nine crew, when off Blyth started to take in water in the engine room. Distress signalled by steam whistle and the nearby trawlers COPIEUX (SN157) (Sk. Turnbull) and AGNES H. HASTIE (SN187) responded. Assessing the situation, Sk. Anderson decided to abandon the vessel and launched the boat, five crew members pulled over to the AGNES H. HASTIE but shortly after boarding the trawler the boat was lost. It was necessary for the COPIEUX to close on the casualty to secure the tow, but the first attempt to connect was unsuccessful when the trawl warp parted under the initial strain. Coming alongside again the COPIEUX managed to pass another warp which was secured by the crew. Sk. Anderson fearing for the safety of the remaining crew, signalled for the AGNES H. HASTIE to come alongside and with some difficulty the four men were taken off, leaving only the skipper onboard. At about 5.12pm coastguards at Seaton Sluice reported that a steam trawler was in difficulties five miles east of the station. The trawler had been taken in tow but appeared to be sinking. The Tynemouth motor lifeboat HENRY FREDERICK SWAN was launched at 6.20pm and found the casualty about half a mile from the Tyne Piers. Escorted by the lifeboat, well down by the stern and swept by heavy seas at the bar, the casualty entered the Tyne and was berthed at Shields Engineering & Dry Dock Co Ltd quay, North Shields.
31.7.1937: Arrived North Shields at 6.30am. with heavy damage to stem and bow plating having been in collision in dense fog with T.I.C hopper ? at harbour entrance.
1938: Sold to Den Fishing Co Ltd, Dundee. Harry McFarlane designated manager.
1948: Sold to John Murray & L. G. Paterson, Buckie. Lowestoft registry closed. Registered at Buckie (BCK29). L.G.Paterson designated managing owner. 13.6.1949: First landing at Fleetwood, 235 boxes £887 gross (Andrew Wilson, Fleetwood managing agent).
28.4.1950: Last landing at Fleetwood, 150 boxes £452 gross
1951: Sold to Alexander S. Murray, Castleford.
By 7.1952: Sold for breaking up. 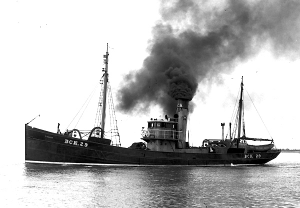