19.11.1902: Launched by Cook, Welton & Gemmell, Beverley (Yd.No.17(333)) for The Hull Steam Fishing & Ice Co Ltd, Hull as JOHANNESBURG.
6.1.1903: Registered at Hull (H711).
1.1903: Completed (Joseph Vivian, manager).
28.5.1915: Requisitioned for war service as a minesweeper (1-3pdr) (Ad.No.1796).
1919: Returned.
1928: Robert Burton appointed manager.
2.10.1931: Sold to William Normandale, Scarborough (managing owner).
8.2.1932: Returning to Scarborough (Sk. William Normandale) at 6.30am in thick fog stranded on the north side of Filey Brigg. Shortly after 7.30am the Filey lifeboat Hallon the Third (Cox. Richard Cammish Jenkerson) was launched. At 9.15am the lifeboat returned to station the men reluctant to leave the vessel. At 1.00pm in worsening weather the Filey lifeboat returned to the scene but the men still would not leave. At 2.00pm, at the request of the Filey Hon. Secy, the Scarborough motor lifeboat HERBERT JOY II (Cox. John Owston Jnr) was launched and arrived at the vessel at 3.20pm, however, the men had decide at 3.00pm that they would leave and were taken off by the Filey boat with great difficulty. The rescued comprised “Crew 8, Pirates 20 about” (The “Pirates” were Filey fishermen who had boarded from cobles probably hoping for pickings if the vessel became a wreck). In late afternoon the vessel slipped off the ledge and the Scarborough lifeboat which was standing off, put three men aboard who secured the tow and the vessel was taken into Filey Bay and beached for examination. At low water the catch was landed overside to carts and hull survey carried out. With no visible sign of damage to shell plating she was subsequently refloated and proceeded to Scarborough.
23.6.1933: Hull registry closed.
26.6.1933: Renamed NORDALE (SH89).
24.9.1935: In transit passed Hull trawler SKEGNESS (H14) (Sk. Richard Wright) homeward from Faroe grounds and anchored off Bempton with boiler trouble. Tow offered but declined as company vessel said to be on way. As weather deteriorated Sk. Normandale deemed it impossible to connect for tow in shallow water and returned to harbour. In E gale SKEGNESS driven ashore under Speeton Cliffs. Radio contact maintained by Sk. Normandale who directed Filey lifeboat to scene. No possibility of rescue by lifeboat or rocket apparatus and all ten crew lost.
By 8.1937: Owned by Thomas W. Perrett, Newton Abbot (managing owner).
1939: Sold to Torbay Trawlers, Brixham (Arthur E. Dexter, manager).
1939: Sold to Boston Deep Sea Fishing & Ice Co Ltd, Fleetwood (Basil A. Parkes, manager).
3.1940: Fishing from Milford (H. E. Rees & Co Ltd, agents).
2.1941: Returned to Fleetwood.
14.1.1942: At about 12.30 p.m. sailed Fleetwood for Bantry Bay grounds (Sk.Harold Wood); fourteen crew. Skipper changed routing and decided to go northward to the Donegal ground.
15.1.1942: At 4.30 p.m. set a course NNW mag. from the Maidens to pick up East Rathlin Light. At 6.20 p.m. steaming at about eight knots struck the Carskey Rocks on tip of Kintyre 2 miles SW of Borgadelmore Point, bumping once violently then two more bumps before stopping and settling firmly about 100 yds from the cliffs. With heavy seas breaking over the vessel boat could not be launched and crew assembled forward. At daylight, James Leonard O’Kane a fireman managed to get ashore and raise the alarm. In the afternoon a Breeches buoy was rigged and crew evacuated but five crew members* lost through exposure, fatigue or swept away by seas (James Leonard O’Kane awarded the BoT Sea Gallantry Medal (Bronze)).
7.4.1942: At MoWT formal inquiry (S.402) at Fleetwood the court found that the stranding and subsequent loss of life was caused by the wrongful acts and default of the Mate, Jack Powell. The court did not blame Sk. Harold Wood for the casualty. 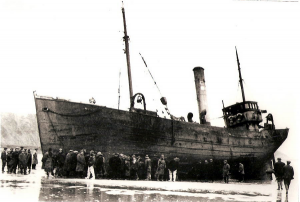 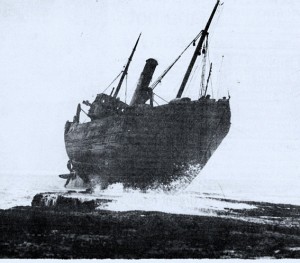 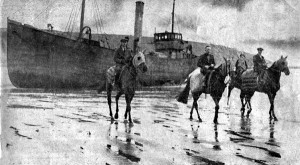 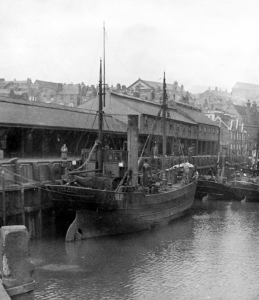