Note: To the south and east of Kintyre, just off Southend, lies tiny Sanda Island. To the east of Sanda, on the run in to the Kilbrannan Sound, is Paterson’s Rock. Completely submerged at high water the rock has trapped three vessels, one of which was the trawler NORSE, On passage between Glasgow and Northern Ireland, she ran onto the rock in the evening. A local motor boat took the crew off and landed them at Southend. The following day the NORSE was sitting high and dry on the rock at low water but was badly damaged. A tug arrived and, over the next few days, attempted to salvage the vessel. On the 27th, however, the area lived up to its fearsome reputation by brewing a vicious storm which worked the stranded trawler so badly that she began to settle in the water. By the 3rd October she had broken up and disappeared under the surface. 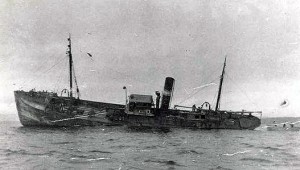 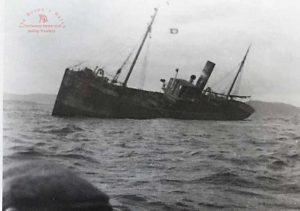