14.2.1911: Launched by Smith’s Dock Co Ltd, South Bank-on-Tees, Middlesbrough (Yd.No.464) for The Cygnet Steam Fishing Co Ltd, Fleetwood (Richard W. Mason, manager) as OSPRAY II.
3.1911: Completed.
30.3.1911: Registered at Fleetwood (FD129). Richard Watson Mason appointed manager).
3.3.1915: Requisitioned for war service as a minesweeper (1-12pdr) (Ad.No.1354). Fitted as Sub-divisional Leader. Based Milford.
By 12.3.1919: Returned to owner at Fleetwood (Thomas Cardwell, manager).
15.4.1933: Fishing in 230 fathoms NW of Tory Island, Co. Donegal, hauled a mine causing damage to nets and gear.
17.4.1933: Landed mine at Fleetwood.
2.11.1933: Arrived Fleetwood from fishing grounds with stern post fractured and bent and rudder bent, reported having drifted whilst at anchor in Vatersay Bay and struck rocks.
5.4.1935: Sailed Fleetwood for West of Scotland grounds (Sk. Robert Kelly); eleven crew.
6.4.1935: About to shoot on grounds south of Gigha, at about 7.55am in collision with steam trawler CALDEW (FD347)(Sk.Edward Harris) suffering damage aft of wheelhouse on starboard side and shell plating holed in way of bunker. Attempted to make for shore to beach but ingress of water in stoke hold and engine room too great and pumps could not cope. Abandoned in lifeboat and lay to until vessel sank at about 8.35am Picked up by CALDEW and returned to Fleetwood. Vessel sank in approx position 55.33N 05.52W, 2 miles off Bellochantuy Bay, Kintyre.
17.4.1935: Fleetwood registry closed “Total loss 4.35. Sunk in collision”.
7.12.1935: BOT Formal Investigation (S.375) found Sk. Robert Kelly and Sk. Edward Harris both in default and suspended their tickets for twelve months.

Note:OSPRAY II carried a crew of ten and was heading for the fishing grounds off the west coast of Scotland, by way of the Sound of Jura on the 6th of April 1935. A second vessel, CALDEW, was fishing off the west coast of Kintyre when an unexplained collision occurred. CALDEW hit OSPRAY II amidships and tore a massive hole in her side.
The damage was so great that coal from her bunkers poured out into the sea.

CALDEW took the damaged vessel in tow in an attempt to beach her at the nearest point but that was ten miles away. OSPRAY’s skipper lowered his boat as a precaution and this was just as well because, as the tow got under way, it was clear that the vessel was settling deeper in the water all the time. The crew manned the pumps until they were waist deep in water but their efforts were in vain. With the fires out and the ship sinking under their feet they were forced to scramble into the lifeboat and abandon their vessel.
Less than an hour after the collision OSPRAY II slipped under in 20 fathoms of water approximately 2 miles off the Bellochantuy shore. 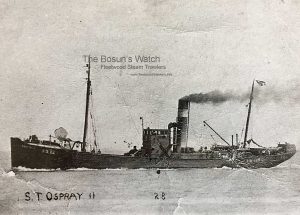 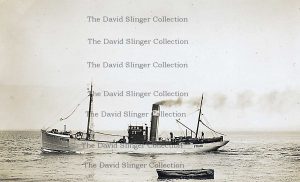