(* – Skippers Albert Wilson & James Myers received Silver Plates from the Board of Trade for their gallant efforts to save life in respect of the stranding of the St. Sebastian .)

Notes: Although the weather was very bad, interestingly neither RED SABRE (Sk. Tom McKernan) approx 50 miles ahead or RED KNIGHT (Sk John Mecklinburgh) about 100 miles astern considered it necessary to reduce speed, yet Sk. Alex Hardy stated to Tom McKernan that he had reduced to 4-5 knots.
There was much speculation at the time of her loss that in view of the relatively small catch and diminished bunkers her stability in those atrocious weather conditions was compromised. This was brought up at the Inquiry.

In a book written some years ago by a captain RN who was a lieutenant at the time on the DAVY (RED FALCON) it was stated that she was an awful sea boat in strong winds and rough seas, and that the helmsman was constantly correcting her head to wind, as she kept “falling off”.

The loss will remain a mystery, but it was stated by a witness that the removal of her two boats and replacement with a single boat under a boom on the centre line had improved her trim and made her easier to handle. So initially there must have been comment about her handling. Tom McKernan who had skippered the RED FALCON for an eighteen month period previously was happy with her behaviour in storm conditions. So the conclusions of the Court were well founded.

There was also the statement from the light house keeper of Skerryvore light, that he saw the steaming lights of the RED FALCON abreast of the light, and then they were gone…a few minutes later, the light house was hit by two mountainous waves in quick succession,that washed over the lantern house, and he thought that these might have “knocked her down”

Note: On the 14th of December 1959, RED FALCON, under the command of skipper Alexander Hardy, was passing through the dangerous area of the South Minch of the west coast of Scotland, where seven tides in meet in a welter of raging waters. She was battling the 90 miles an hour winds of a WSW storm that generated 40 foot waves, as she returned from a trip to Iceland.

Some 50 miles ahead of her was her sister ship RED SABRE under Tom McKernan while the RED KNIGHT under John Mecklenburgh was some 150 miles astern. Tom Mckernan was the last person to have contact with the FALCON in a radio message. Alex Hardy called RED SABRE as the Falcon passed abeam of Skerryvore.

McKernan advised that he was heading for the lee of the Irish coast as he shaped his course from Skerryvore to Inistrahull and Alex Hardy agreed that it was the best thing to do. stating that he would do the same. That was the last time the ship or her crew was heard of. The skippers of RED SABRE and RED KNIGHT later formed the opinion that the FALCON had been overwhelmed by a huge wave.

RED FALCON never berthed in Fleetwood’s Wyre Dock on the 15th as she was expected to. On the 16th of that month the villagers of Scarinish on Tiree, in the Inner Hebrides, discovered wreckage including floorboards from the lifeboats, a rocket container box and lifejackets stamped with the missing vessel’s name were washed up on the beach, RED FALCON was gone and nineteen men had lost their lives.

Ironically, Alex Hardy had not been in the best of health and was considering retiring. That trip, which he undertook as a favour to the vessel’s owners, would have been his last.

But there are further twists to this tale. Benjamin (Benny) Thomas was a long serving Chief Engineer with Iago and was signed on RED FALCON. One day a fireman was lowering an ash bucket into the engine room and it became detached from the rope and struck Benjamin on the head. This meant a trip to the hospital when they docked. The following trip he was thrown from his bunk and injured his arm. “The vessel,” he reckoned, “…..was trying to tell me something.” As a result he signed off and sailed with RED SABRE instead. The next time that RED FALCON sailed she was lost with all hands.

The officers and crew of the protection vessel HMS ARMADA sent a cheque for £150.00 to the Mayor of Fleetwood for the relief fund, no small amount for naval personal in those days.

The BOT report on the loss HERE 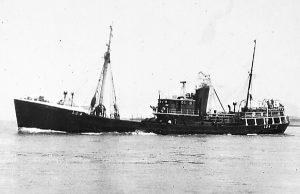 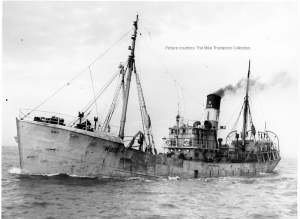 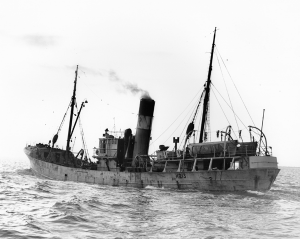 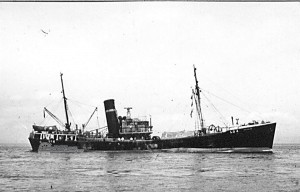 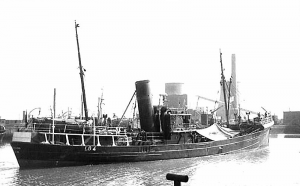 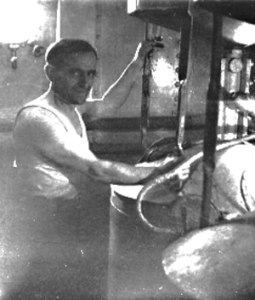 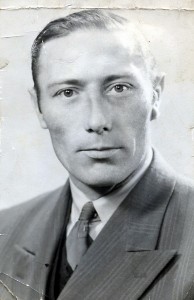 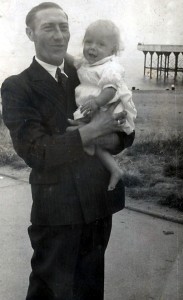 By the Radio Operator of the British Trawler

Reproduced thanks to Norman Evans

ODE TO THE DUNKIRK

Cheerio, Dunkirk, you’ve finished your cruise.
You’ll soon be at home so you’ve nothing to lose,
You go home with the knowledge that you’ve done your job’
Regardless of tedium, the weather, the scrob,
You’ve fixed up our Radar, and mended our Winches,
Been our Referee when we’ve been in the clinches’
Your Doctor has proved that he knows every trick,
As he’s jumped in the Dingy to tend to our sick,
Regardless of weather not once did he lag,
As he floated about with his little black bag,
And talking of weather my pencil runs faster,
When I think of your worthy weather forecaster,
He’s been on his toes with his general impressions,
Of fast moving fronts and deepening depressions,
Your Pilot’s the bloke who’s had all the fun,
With Charts and Dividers he’s plotted each run,
His job has been easy, gone along fine,
Because none of his flock has gone over the line,
But ‘Maria Julia’s’ oft lost a kill,
Because of his knowledge, his patience, his skill,
All of your technicians who make work an art,
The rest of your crew who have all taken part
Can go back to Rosyth, have lots of fun,
Rejoice in the knowledge of good work well done,
But here, ere you leave, let a small word be said,
Of your Liaison Skipper, patient old Fred,
No matter how much his temper was taxed,
He maintained his smile and never relaxed,
Not once from his duty has he ever drifted,
No matter how often the Haven was shifted,
His round-ups have been a joy to attend,
He’s treated each ship as a personal friend,
Your Captain, of course, is well in our mind,
The Andrew could do with more of his kind,
Doing a job that in some ways is a joy,
Regardless of things that crop up to annoy,
Conducting transfers with the greatest precision,
Or saying his piece like some great Politician,
When Icelandic Gunboats some stunt tried to pull,
And came on the air to dish out the ‘Bull’,
We salute you all now as you go on your way,
And wish you the best when you reach the U.K.,
You’ve done the job well, not once did you shirk,
So, cheerio now, God be with you, Dunkirk.