20.2.1901: Launched by Miss Henderson, niece of the owner, at A. Hall & Co, Aberdeen (Yd.No.386) for William Hall Dodds (64/64), Aberdeen as CHANCELLOR.
26.3.1901: Registered at North Shields (SN279).
3.1901: Completed as a liner. William Hall Dodds designated managing owner.
26.6.1902: Sold to The “Dodds” Steam Fishing Co Ltd (64/64), Aberdeen. William Hall Dodds designated manager.
29.6.1905: The body of fireman Francis Ingram (29) of Aberdeen who had drowned was identified at Point Law, Aberdeen.
24.02.1906: When entering Aberdeen harbour at low water and with heavy swell running, grounded on the ledge opposite the flag house on the North Pier. Rolling heavily in the swell, steam paddle tug JOHN McCONNOCHIE (??grt/1879) attended, connected, refloated and moored alongside the Fish Market. Making water and believed propeller and stern post damaged. Placed on pontoon for survey and subsequent repair.
26.5.1906: In the afternoon when putting to sea from her berth in Albert Basin, Aberdeen adjacent to Point Law, whilst manoeuvring, ran straight across the dock running into the wharf at the new portion of the Fish Market causing serious damage to the timber facings. Backed off and put to sea. Later returned with damage visible, stem twisted and several shell plates set-in.
23.9.1906: In company with the steam trawlers OCEAN KING (A174); SUNRAY (A668); HARRY ROSS (A453); St. NICHOLAS (A489) and LAUREATE (SN257), arrived at Lerwick, Shetland in the charge of the Fishery cruiser BRENDA (174grt/1898) arrested for alleged fishing within the limit on the west side of Shetland.
4.3.1909: While alongside in Aberdeen, Ch Eng. Harry Denham (51), North Shields and 2nd Eng working in the engine-room, when the packing of the boiler manhole suddenly blew out. 2nd Eng, who was working at the side of the vessel next to the ladder leading from the engine-room to the deck, was able to make his escape, but Denham who was at the other side, failed to get away, and was terribly scalded with boiling water and steam. After the steam had cleared, his body was recovered, and removed by police ambulance to the mortuary in Lodge Walk.
11.1911: Sold to Robert Craig, Alexander Leiper & James Leiper, Aberdeen (64/64 joint owners). Robert Craig designated managing owner.
1.12.1911: North Shields registry closed.
4.12.1911: Registered at Aberdeen (A423).
8.8.1912: Stranded at Duncansby Head.
10.8.1912: Refloated and proceeded to Aberdeen.
1.1.1914: Tonnage altered to 64.20 net under provision of Merchant Shipping Act 1907.
12.8.1915: Sold to William Hall Dodds (64/64), Aberdeen.
16.5.1916: Sold to the Port St. Mary Fishing & Curing Co Ltd (64/64), London. Charles Jeffs Jnr, Hest Bank designated manager.
2.2.1917: At Fleetwood Police Court:, deckhand Norris Linham was fined 40s for disobedience by failing to join the vessel.
3.1917: At Fleetwood. Fitted with Hotchkiss 6pdr gun (No.1252); complement increased by two gunners.
29.5.1917: Requisitioned for Fishery Reserve.
11.10.1917: At Fleetwood Magistrates Court, Owen McNeil, Harry Coward and William L. McCaskie were summoned for refusal to go to sea when ordered and delayed a convoy twelve hours. Coward said it was blowing too hard in the morning to go to sea, the wind had not abated in the afternoon when they were ordered to go down. McCaskie who had been fined previously for a similar offence was fined 60s and the other two fined 40s; a week was given to pay.
5.8.1918: Sold to Ernest Taylor & Noah Ashworth, Fleetwood. Joseph A. Taylor designated manager.
1919: Released.
31.7.1919: Aberdeen registry closed.
2.8.1919: Registered at Fleetwood (FD339).
15.3.1924: On passage to Plymouth, put into Falmouth leaking. Subsequently beached for inspection.
17.03.1924: After effecting temporary repairs sailed for Plymouth.
7.10.1924: Sold to John Chant, Plymouth (Plymouth Trawlers Ltd). John Chant designated managing owner.
11.9.1926: Arrived Plymouth in tow of the Plymouth steam trawler TROJAN (GY848), having been picked up disabled with broken propeller shaft.
19.11.1927: Arrived back in Sutton Pool, Plymouth having lost her her trawling gear valued at £130.
4.2.1930: Arrived back in Sutton Pool, Plymouth with a navigational buoy in tow, picked up some 14 miles SW of Start Point. Once connected progress towards Plymouth had been slow at about 2 knots. Upon inspection the buoy was found to be dragging a chain cable between 60 to 100 fathoms in length. The buoy was a bell buoy and had travelled across from Canada, local boats had been keeping a look out for it, as it and had been drifting in the Channel for over a fortnight.
17.11.1931: Sold to Plymouth Trawlers Ltd, Plymouth. John Chant designated manager.
15.1.1934: Sailed Plymouth for West of England grounds (Sk. Edward Charles Rowe); nine crew all told.
17.1.1934: Fishing off the Eddystone, stopped at 2.00 a.m. due to bad weather and poor visibility (wind SW force 7-8, rain). Decided to return to Plymouth, set course NE by E and proceeded at full speed (7 to 8 knots), with the skipper and the Bosun, Wilfred Scobie and a deckhand William George Penberthy in the wheelhouse. The skipper was absent from the wheelhouse for 15 to 20 minutes and returned at about 4.30 a.m. shortly before the vessel stranded in Whitsand Bay near Withnoe Point, Rame Head. After stranding the engine was worked “Full Astern” but after a few revolutions ordered “Stop” and then “Full Ahead”. The skipper stated that this was done for crew safety. Fires were drawn and crew saved by rocket apparatus and breeches buoy.
1.1934: Abandoned and became total wreck.
31.1.1934: Fleetwood registry closed.
20.3.1934: At BOT Formal Investigation (No. S.362) held at Plymouth, the Court considered that the skipper took an undue risk in proceeding on a course at full speed from an uncertain or assumed position and without taking soundings during such course. The Court found that the stranding and subsequent loss were due to the wrongful act and default of her skipper, Edward Rowe. His ticket was suspended for twelve months.

Movie of the wreck of Chancellor 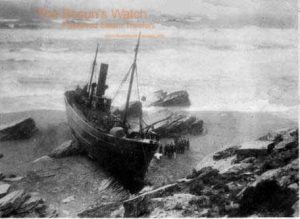 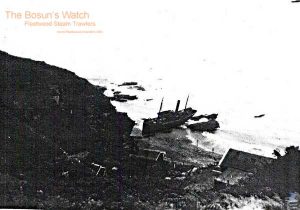 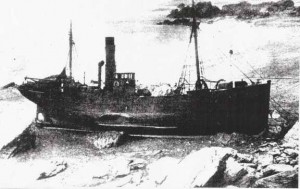 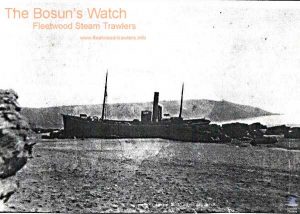 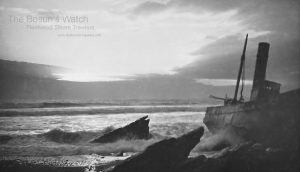 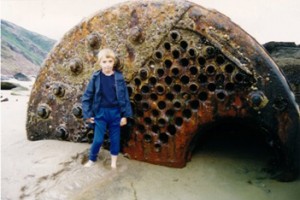 Chancellor’s boiler (1989)
Picture from the Internet 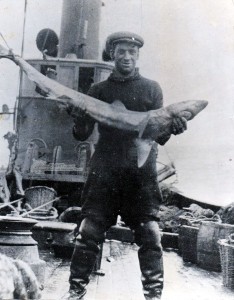 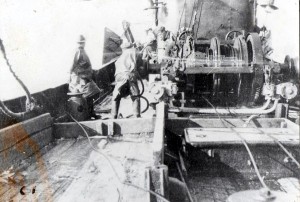