14.12.1905: Launched by Earle’s Shipbuilding & Engineering Co, Hull (Yd.No.512) for Crown Steam Fishing Co Ltd, Grimsby as CROWN.
1.1906: Completed.
30.1.1906: Registered at Grimsby (GY108).
30.1.1906: George Edward James Moody, appointed manager.
1906: Engaged in fishery research off North Africa.
1906: Transferred to Fleetwood.
6.11.1906: Sailed Fleetwood at 2.00pm. for West of Scotland grounds (Sk. John Dier); ten hands all told. At 3.30pm. when some 50 yds south of the Lune buoy set a course NW to pass between Maughold Head and the Bahama light vessel; patent log streamed. The weather was fine and clear, the sea smooth with a light ENE breeze, the ship making 9 to 91/2 knots. At 4.30pm. the skipper went below leaving the second hand in charge of the watch, but did not give any orders except course to steer. At 6.00pm. the second hand was relieved at the wheel by deckhand Duffy, on leaving the wheelhouse the second hand spoke to the skipper and asked if he was going to get his tea. The skipper told him to go and get his own tea and to call him afterwards; this statement was born out by Duffy. At 6.15pm. the third hand took the wheel with deckhand Carroll as look-out. At some time Carroll left the wheelhouse to use the toilet leaving the third hand alone. At about 8.15pm. the vessel struck and remained fast, the skipper came on deck and stopped and reversed the engine at full speed, but all efforts to move her failed. The Ch Eng. reported the engine room and the vessel herself was fast filling and in a short time the deck aft was under water. The boat was turned out and all hands abandoned to the shore where they landed safely.
7.11.1906: The position of the stranding was about one mile SW of Maughold Head, Isle of Man and about 100 yards from the shore. A few days later wreck was attended by Liverpool and Glasgow Salvage Association’s steam derrick barge LADY KATE (135grt/1881) and attempts were made to get the vessel off but she settled and was submerged at high water. Later declared a Constructive Total Loss (CTL).
29.11.1906: At the formal investigation held at Liverpool (S.231) the Court found that the stranding of and damage to the s.s. “CROWN” were caused by the default of the master and second hand, and by the neglect of the third hand. The Court severely censures the master, John Dier, for not giving proper and sufficient instructions for the navigation of the vessel before leaving the deck, and suspends the certificate of the second hand, William Lindhurst, for three months for not carrying out such orders of the master as were given, and considers Charles Wood, the third hand, neither a fit or proper person to hold such a position, as he knew the vessel was going at full speed on a dark night and that there was no one keeping a look-out.
2.1.1907: Grimsby registry closed “Wrecked”. 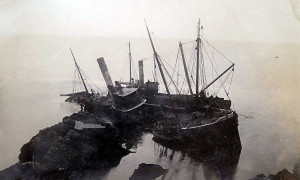