Note * : At a Ceremony presided over by Coun. W. Elliot, JP, Chairman of Fleetwood Urban District Council and other dignitaries, a presentation was made on behalf of the Underwriters and the Brooklyn Steam Fishing Co Ltd to Sk. Brewster and crew. The Skipper received a silver tea and coffee service and a suitably inscribed salver. The crew, S. Murgatroyd, Mate. G. Gristenthwaite, Ch Eng; B. Hampton, 2nd Eng; B.H. Masters, Bosun; R. W. O. Ridley Wireless operator; J. Hurr, T. H. Cowley, J. E. Ogden, J. Wright, Deckhands; J. Gilchrist & R. Hampton, Firemen, and L. G. Matthews, Cook, received monetary gifts and testimonials for there part in the rescue. The testimonials to S. Murgatroyd, J. Hurr, T. H. Cowley and J. E. Ogden recorded the fact that they twice put off in the boat to go to the rescue of the eight men left on the BRIARLN. That they were unsuccessful was not due to any fault on their part; they had only been beaten by the elements.

The RNLI also paid tributes to Capt. Brewster and the crew for their gallant efforts. The Institution presented its thanks inscribed on vellum to the steam trawler CUIRASS, an inscribed binocular glass to the skipper and a monetary award to each member of his crew. 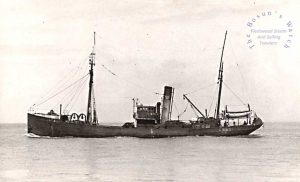