Notes
* – 8.12.1898: At a presentation in Hull Town Hall, the German Society for the Saving of Shipwrecked Mariners awarded the skipper, S. Manthorpe a diploma and gold medal; the mate G. Spofford a diploma and silver medal, and a 100 mark note; and the boatswain and third hand Nils Rasmussen and James Wells each received a 100 mark note.

** – 8.11.1928: The Air Council have awarded a piece of plate to Harry Reeve and a sum of money to the mate, chief engineer, and six other members of the crew in recognition of their services in effecting the rescue of the officers and airmen of Southampton flying boat No 1125, which came down in Cardigan Bay on 30th June. Crew rescued. Ft Lt. A. Stevens, Fl Lt.(Nav) C. A. Turner, Air Mech. Long and W/T Op. Geddes. 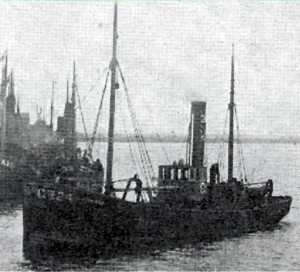