7.12.1915: Launched by Smith’s Dock Co Ltd, South Bank-on-Tees, Middlesbrough (Yd.No.606) for John Reed and Thomas Moar Reed, Tynemouth as KIRKLINTON.
22.1.1916: Registered at North Shields (SN236). Thomas Moar Reed designated managing owner.
2.1916: Completed.
24.2.1916: Landed at North Shields (Sk.George Hays) after a ten day maiden trip, £500 gross, a reasonable return given the bad weather.
4.1916: Requisitioned for war service as a minesweeper (1-6pdr HA) (Ad.No.3272). Based Humber.
27.12.1916: Sold to The “Wyre” Steam Trawling Co Ltd, Fleetwood. Magnus Bodvar Johannessen Wedum designated manager.
27.12.1916: North Shields registry closed.
29.12.1916: Registered at Fleetwood (FD293).
1919: Returned to owner.
13.7.1920: At Fleetwood Police Courts, William Roberts (18), deck hand was charged with disobeying a lawful command whilst under articles. The trawler had arrived in port on the Sunday 4th and was due to sail on Tuesday 6th afternoon, but for a particular reason it was arranged that she should not leave port until the morning of Wednesday 7th. At that time, all members of the crew, with the exception of the accused, were on board, and in consequence of Roberts’ absence the vessel was delayed 11 hours. Defendant was fined £5 previously for a similar offence and was again fined £5, the chairman pointing out that the magistrates were quite conversant with the casual way in which the men broke their engagements, but if the owners broke their part of the engagement there would be a riot in Fleetwood.
5.10.1921: Registered at Fleetwood as EAMONT (FD293).
26.8.1926: At Rothesay Sheriff Court Sk. Richard J. Gornall was fined £70 or sixty-days imprisonment for obscuring the vessel’s name and number, also failing to stop when summoned to do so by a Fishery Cruiser in the Firth of Clyde.
10.6.1930: At Fleetwood Police Courts James H. Bryant, (24), of the steam trawler, was charged with being drunk and disorderly. On entering the Fleetwood Arms Hotel, he was refused a drink owing to being under the influence of alcohol, Bryant showed his displeasure by upsetting two tables in the smoke room, shattering about 5s. worth of glass tumblers, and when being ejected by the barman broke two panes of coloured glass in the vestibule, valued at £8. Bryant pleaded guilty, and was fined 40s. for being drunk and disorderly, 10s. for doing wilful damage ordered to pay for the damage, a total of £10 15s. He was given one month to pay.
31.3.1932: Stranded at Castle Bay, Barra, after suffering steering failure. Refloated after some five hours with the assistance of the steam trawler FOSS (FD243). Found to be making water and with all pumps working set course for home.
2.4.1932: Arrived Fleetwood. Landed and later placed on slip for survey and repair.
18.1.1934: Sold to Thomas Moar Reed, Tynemouth. Thomas M. Reed designated managing owner.
23.1.1934: Sailed Fleetwood for North Shields via fishing grounds.
2.1.1934: Arrived North Shields with 150 boxes.
24.11.1938: Arrived at Aberdeen seeking medical attention for fireman Alexander Walton, South Shields who damaged his shoulder when he was flung against the ship’s side while trimming coal on the fishing grounds some 170 miles off Aberdeen.
11.2.1941: In the North Sea in position 58 15N 3 26W, attacked by German aircraft, bombed and damaged. All ten crew rescued.
12.2.1941: Came ashore the next day between Latheronwheel and Lybster, Caithness and broke up.
2.1941: Fleetwood registry closed. 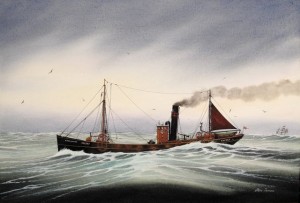