1906: Launched by Hall, Russell & Co Ltd, Aberdeen (Yd.No.146) for The Balgownie Steam Trawl Fishing Co Ltd, Aberdeen as BALMEDIE.
10.1906: Completed.
29.12.1906: Registered at Aberdeen (A113). Andrew Lewis designated manager.
By 1912: Believed fishing out of/landing into Fleetwood.
3.09.1912: In heavy weather and SW strong gale, between The Smalls and Bardsey Island, sighted drifting Admiralty caisson which had broken away from tug MILEWATER (320grt/1888) about 20 miles NNE of The Smalls while on delivery voyage from the yard of Workman, Clark & Co Ltd, Belfast to Portsmouth. Closed and with great difficulty Sk. Andrew Smith managed manoeuvre tand get a line onboard to hold the caisson.
4.9.1912: At about 3.00am. the two man runner crew, exhausted by their experience, requested to be taken off the caisson and a boat transfer was effected with two members of the trawler crew replacing them (one named RILEY). Steam trawler WRENTHORPE (FD80) came on the scene and also got a line onboard and tow was commenced for Holyhead with HM cruiser BRISTOL escorting.
5.9.1912: Tow parted but reconnected.
7.9.1912: Arrived off Holyhead, transferred to tug MILEWATER and placed safely on the Government Buoy in the West Refuge Harbour.
14.11.1912: Salvage awards were made in the Admiralty Court in respect of services rendered to the Admiralty caisson in September. The caisson cost £16,000 to build. BALMEDIE was awarded £600 with a further £45 for the three men who rendered boat services. WRENTHORPE was awarded £530.
1.1.1914: Tonnage altered to 81.52net under provision of Merchant Shipping Act 1907.
8.1914: requisitioned for war service as a minesweeper (Ad.No.350). Dardanelles campaign (Sk. George Reynolds RNR).
27.4.1915: During progress of the battle off Anzio Beach, berthed alongside at stern of hired Glasgow registered steamer IONIAN (8268grt/1901) which was light ship. Ionian turned propeller which cut into shell plating causing her to fill and sink alongside. All crew saved.
22.12.1915: Aberdeen registry closed “Ship lost at Dardanelles, April 1915”. 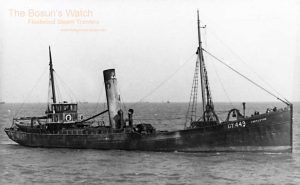