1914: Launched by The John Duthie Torry Shipbuilding Co, Aberdeen (Yd.No.405) for The National Steam Fishing Co (Aberdeen) Ltd, Aberdeen as LEUKOS.
8.1914: Completed.
27.8.1914: Registered at Aberdeen (A102). James Scott Jnr appointed manager.
12.12.1914: Arrived Aberdeen (Sk. George Robertson) with body of a naval officer picked up at sea to the NE of Aberdeen. Body believed to be an officer belonging to HMS HAWKE (Capt. Hugh P. E. T. Williams RN) torpedoed off Peterhead by U-boat (U.9) on 15 10.1914.
6.1915: Requisitioned for war service as a boom defence trawler (Ad.No.N.I.). Based Scapa, Orkney.
Post 12.3.1919: Returned to owner at Aberdeen.
27.1.1920: Sold to Arthur Reginald Tucker & James Cornelius Tippet, Cardiff. James Cornelius Tippet appointed manager.
2.4.1920: Sold to Tucker, Tippet & Co Ltd, Cardiff. James Cornelius Tippet appointed manager.
1922: Fishing from Milford. Harry E. East managing agent.
27.2.1927: Sailed Milford for the fishing grounds (Sk. Edward Major). Owing to weather outside came to anchor off Popton Point.
28.2.1927: At about 10.00am. observed trawler THOMAS BARTLETT (LO373) coming in from sea and anchored close by, the wind was south west to west blowing a strong gale. The bosun, Charles Richard Johnson was on anchor watch, and reported to the skipper that the THOMAS BARTLETT was dragging and when some 20 to 30 yards away it appeared she would drive across the bows. The whistle was sounded and the THOMAS BARTLETT eased her cable and started to come astern but did not clear, hitting the stem with the port side, the head coming round to starboard and the THOMAS BARTLETT dropped down along side on the starboard side. No damage to the stem was apparent.
28.2.1927: Sailed for the fishing grounds but found water ingress in way of the stem, temporary repair carried out by Ch Eng. and continued on voyage.
1.6.1927: Last landing at Milford.
18.6.1927: Sold to Dublin Trawling, Ice and Cold Storage Co Ltd, Dublin.
24.6.1927: Aberdeen registry closed.
6.1927: Registered at Dublin (D86). Patrick Fannon appointed manager. Occasional landings at Fleetwood.
Mid 2.1940: Last landing at Fleetwood.
29.2.1940: Sailed Dublin for the fishing grounds via Ayr to coal (Sk. James Potter Thomasson); eleven hands all told. The ship had the Irish tricolour painted on her hull clearly indicating a vessel from a neutral country; fitted with wireless.
1.3.1940: Sailed Ayr for the ‘The Bank’ off Tory Island.
9.3.1940: At 5.00am. spoke to two other trawlers of the same company in Donegal Bay, stated 420cwt of fish and ETA Dublin 12.3.1940.
9.3.1940: A group of Fleetwood trawlers fishing 12 miles NW of Tory Island, Co. Donegal, ALVIS (H52); FLYING ADMIRAL (H66); JOHN MORRICE (A786); PELAGOS (GN55) and SEDOCK (SN12) and reported with the Irish trawler LEUKOS (D86) also in the vicinity. At 2003 (Wilhelmshaven time) a U-boat (U.38) surfaced having observed through periscope and listening device the group of trawlers. On the surface noticed that all had their lights on and were apparently forming a guarding line on a N-S course. In his log the CO. Kptlt. Heinrich Liebe wrote “I decided to administer a warning to one of them with the gun.” At 2113, and within about 200 metres of the target, fired a single round at a ship, hitting her in the engine room; the U-boat withdrew staying on the surface about one hour until ship foundered. No attempt was made by the U-boat to identify the vessel or search for survivors. None of the five trawlers in the vicinity closed to investigate, if in fact they were aware of the incident. Although no conclusive evidence confirms, the ship probably was the LEUKOS; all eleven crew lost*.
16.3.1940: Owners expressed fears for the safety of the vessel.
21.3.1940: Lifeboat containing a lifebuoy bearing the name ‘S.T. LEUKOS’ washed up at Scarinish, Tiree, Inner Hebrides.
26.3.1940: Posted overdue.
10.4.1940: Posted missing.
4.1940: Dublin registry closed. 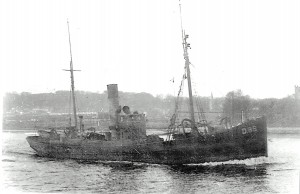 If you have any technical or historical information about this vessel, please contact webmaster@fleetwood-trawlers.info