Around 06:00 on January 12th, the skipper decided to try a few more hauls off Kilchiaran Bay before finally turning south for home. The night was dark and there was a heavy swell running when there was a series of bumps and CORMORAN came to a shuddering halt. The crew realised that they were making water fast and it was decided to abandon the vessel but, before they could do so, a series of violent lurches threw the lifeboat and the men launching it into the sea. The crew still on board jumped from the deck onto the rocks and spent a miserable night beneath a couple of blankets. The following morning they spotted a house and walked to it where they were given hot food and drink. The rest of the crew, who they thought were lost, had managed to clamber aboard the lifeboat and had made it to Tiree, The skipper was the only man lost. 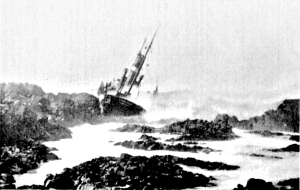