*Operation Ariel – withdrawal of remaining troops of the British Expeditionary Force from France plus other nationals, civil and military.

Notes 1 CLOUGHTON WYKE has a great interest for me. It was the vessel that brought my father off the beaches north of Dunkirk. The only time he would ever mentioned the war was to relate how himself and Lawrence Horsley “commandeered” a motorcycle and ran north to La Panne. When they got there the place was in flames but there was a Fleetwood trawler tied up alongside a burning jetty. On the foc’sle head was a group of deckies, oblivious to the shot and shell whistling all around them, betting cigarettes as to who could hit the church bell with the .303 Lee Enfield the trawler was armed with. As they pulled up, the wheelhouse window dropped and the skipper (I wish I knew who it was) leaned out and shouted “Hello Jim, need a lift home?” It was an acquaintance of his and he came straight back to Fleetwood from the Hell that was Dunkirk.

Notes 2 CLOUGHTON WYKE was converted into a minesweeper and was sunk in the Humber estuary after being attacked by German aircraft. The following quote indicates the severity of attacks at that time.
“That February was indeed the Luftwaffe’s swan song over the shipping routes, for it carried out more attacks in Nore Command waters that month (fifty) than since the previous May. All but one were in the Humber and Yarmouth Sub-Commands. The 2nd and the 5th were the worst days. On the former the Grimsby and Yarmouth M/S and patrol trawlers were attacked on station by at least twenty planes, and Grimsby’s CAPE SPARTEL and Yarmouth’s CLOUGHTON WYKE were sunk. On the latter a convoy as well as scattered warships were targets. The Harwich A/S trawler KINGSTON OLIVINE was strafed near 54G Buoy, without damage or casualties. 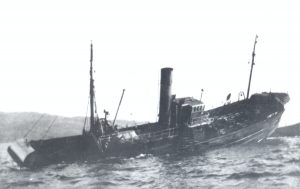 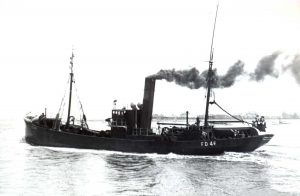 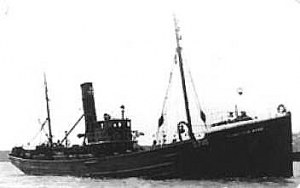