5.2.1916: Launched by Cochrane & Sons Ltd, Selby (Yd.No.710) for Richard Watson Lewis, Aberdeen as KATE LEWIS.
7.8.1916: Completed. Richard Watson Lewis designated manager.
8.1916: Sold to The Admiralty and fitted out as a minesweeper and later a minelayer (Ad.No.2975).
17.10.1916: Registered at Aberdeen (A620).
20.2.1919: Laid in upper dock at Aberdeen awaiting restoration as a fishing vessel.
28.1.1920: Aberdeen registry closed.
1.4.1920: Recommissioned at Sheerness for duties with Actaeon Torpedo School at Sheerness part of the torpedo school HMS VERNON.
1920: Attached to HMS VERNON employed as a tender on minelaying trials.
4.8.1920: Arrived Harwich.
17.3.1921: Sailed Chatham for Guernsey.
19.3.1921: Arrived Guernsey.
4.11.1921: At Dover participated in trials with HMS THRUSTER (P.No.F76) tender to Actaeon Torpedo School at Sheerness.
18.1.1922: Employed in mining work directed by to Actaeon Torpedo School at Sheerness. Paid off into C&M at Sheerness pending decision of The Admiralty to mine training. Remains attached to Actaeon ready to complete full complement if required.
8.6.1922: 8.6.1922: To be towed to Portsmouth at first opportunity. To be attached to HMS VERNON employed as a tender on minelaying trials but not manned, crew as required to be drawn from other tenders or services.
1935: Transferred to Mediterranean Station.
1.9.1936: Arrived Portsmouth from Alexandria.
8.9.1936: Paid off to reserve.
30.10.1936: The Lords Commissioners of The Admiralty in a memo to the Privy Council stated that the accommodation in the trawlers VERNON and KATE LEWIS at all times falls below the recognised naval standard to the discomfort of the personnel on board. Recommended that hard-lying money at half rates should be paid to the officers and ratings on board those trawlers. The Privy Council approved the recommendation.
26.1.1939: Sold to Boston Deep Sea Fishing & Ice Co Ltd, Fleetwood. Basil Arthur Parkes, Cleveleys designated manager.
2.1939: Arrived Fleetwood from Portsmouth.
10.2.1939: Arrived Glasson Dock.
4.1939: After dry docking by Nicholsons (Glasson Dock) Ltd, completed refit by James Robertson & Sons Ltd, Fleetwood and reclassified as a steam trawler at Fleetwood.
2. – 4.1939: Converted to a fishing vessel by James Robertson & Sons Ltd, Fleetwood.
24.4.1939: Registered at Fleetwood as NOREEN MARY (FD4).
25.4.1939: Sailed Fleetwood for fishing grounds (Sk. J. Reader). During trip put into Douglas, IoM with winch problems. Superintendent Engineer, W. Lewis flew over to IoM to oversee repairs. After fishing was resumed a further breakdown necessitated repairs at Peel and when a third problem arose the trip was aborted and returned to Fleetwood.
4.5.1939: First landing at Fleetwood, 158 boxes grossed £260. Harry Blackburn Jnr, President of the Fleetwood Fish Merchants Association, bought the first box of fish and as was customary was awarded a new hat.
8.1939: Sold to Carnie & Gibb, Newhaven.
25.8.1939: Fleetwood registry closed.
8.1939: Registered at Granton (GN17). William Carnie Jnr, Glasgow designated manager. Fishing from Ayr (Granton Harbour closed.
1943 HMS LOCHINVAR relocated to Granton from Port Edgar).
1.7.1944: Sailed Ayr via Oban for Butt of Lewis ground (Sk. John Flockhart); ten crew all told.
5.7.1944: At 21.50 shelled by U-boat (U.247) while fishing 20 miles W of Cape Wrath and sunk; eight crew killed*.
6.7.1944: At 04.25 two injured survivors (2nd Engineer – William Pryde & deckhand – James MacAllister) both with shrapnel wounds taken aboard HM Trawler LADY MADELEINE (P.No.FY.283)(H243).

14.01.1946: At the Nuremburg Trials an affidavit on the incident was given by James MacAllister, of Adelphi Place, Portobello, a deck hand on the “Noreen Mary”, which was sunk by gunfire from the U.247 while fishing off the West Coast of Scotland on July 5th, 1944. Macalister is now a rigger at Granton. The affidavit formed part of the evidence submitted by Col. H. W. Phillimore. of the British prosecuting staff, in the case against Karl Doenitz, the 55-year-old engineer’s son, who rose to command the Germany Navy and ultimately became ” Fuhrer of Flensburg.” The diary of Oberleutenant zur See Matschulst, the U-boat commander, said: “The sinking by flak of a fishing vessel in this area testifies to great offensive spirit and nerve.” Of the crew of ten, six were killed, including John Flockhart, skipper; Alexander Barnett. mate; Alexander Mackenzie, fisherman; George Gordon, fireman; Charles Lindsay, cook; and unnamed deck hand. The chief engineer, William Jackson, was thrown clear of the ship, but never seen again. In his affidavit MacAllister said two torpedoes missed the vessel. Then the U-boat surfaced and killed several men with its first machine-gun burst. It circled the helpless ship before using its heavier gun, which sank the ship. ” I swam around and managed to scramble on to the overturned bow our lifeboat. Even now the submarine did not submerge, but deliberately steamed in my direction, and when only 60 or 70 yards away fired directly at me with a short burst from the machine-gun.” MacAllister slipped down into the water until the submarine submerged. Afterwards he pulled the second engineer, William Pryde, on the wreckage with him. They were rescued at daylight by a trawler. Pryde had 48 shrapnel wounds and MacAllister 14. 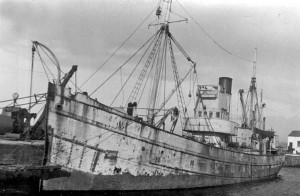 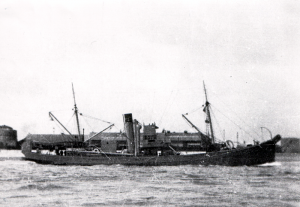 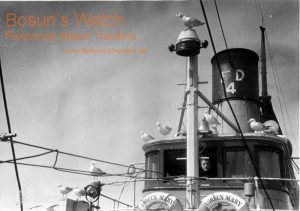