3.2.1909: Launched by Smith’s Dock Co Ltd, North Shields (Yd.No.388) for their own account – Smith’s Dock Co Ltd, North Shields as NUNTHORPE HALL.
2.4.1909: Registered at North Shields (SN90).
4.1909: Completed. Sold to The Admiralty.
26.4.1909: North Shields registry closed “Ceased fishing”. Fitted out as a minesweeper and commissioned as HMS SEAMEW (Ad.No.2).
26.9.1909: Arrived Devonport for conversion to a mine surveyor. Based at Portland for minesweeping trials.
1914: Based at Chatham/Sheerness training fishery reserve crews (RNR(T) section personnel).
1.1920: Renamed NUNTHORPE HALL.
21.04.1920: By order of The Lords Commissioners of the Admiralty, offered for sale as lies at Milford by auction, Messrs C. W. Kellock & Co, London auctioneers.
4.5.1920: Sold by auction at Milford to Edward D. W. Lawford, Milford Haven for £5,000.
12. 8.1920: Sold to Colin L. Mason, Cardiff (Atlantic Trawlers Ltd).
13.8.1920: Registered at London (LO393). Colin L. Mason designated managing owner.
By 1924: Sold to Edward D. W. Lawford, Milford Haven. Edward D. W. Lawford designated managing owner.
25.10.1925: Sold to George Hindle, Wilpshire, Lancs & others. Joseph A. Taylor, Harold Taylor & Albert V. Thompson, Fleetwood designated managers.
8.12.1925: London registry closed.
9.12.1925: Registered at Fleetwood (FD78).
1927: Trading as Islay Trawlers Ltd, Fleetwood.
4.1.1928: At Fleetwood Police Court, George Gregson (21) was fined 30s and ordered to pay a £1 11 6d advocate’s fee, when he pleaded guilty to disobedience whilst engaged to join the ship. His failure to join resulted in a delay of over five hours until a substitute was found and taken out by boat at a cost of 30s to the Wyre Light where the trawler was waiting.
1930: Sold to Ephraim H. Hindle, Wilpshire, Lancs & others.
6.1.1930: During the past few months a considerable amount of work has been done to the vessel at Fleetwood to make her suitable for a new fishing venture. An up-to date refrigerating plant has been installed in the fish room and it is expected that in the course of another week or so she will be on her way to the Canary Islands. The final details in connection with the venture are now being completed. As soon as the fish is caught it will be frozen and at the end of the trip landed and boxed up for despatch. A crew of Fleetwood men have been signed on for the voyage.
29.01.1930: Sailed Fleetwood for West of Scotland grounds; nineteen crew and a number of engineering representatives. The object of the trip is to try out the equipment under actual sea conditions. Fishing in the Minch hauled ten boxes of mixed fish which was gutted as usual and then passed to the fish room in which the plant is installed. The sterilising process is to remove all bacteria from the fish. Firstly, it a cleaned with sterilised water, and the crew work in air which has likewise been sterilised and then when in an oven the fish is sprayed with brine water for five minutes. The brine is then run off into the bilges, the fish flooded again with brine water. They remain thus for about twenty minutes, then the water is returned to the circulatory system, and the freezing process begins. A ton of fish can be sterilised and frozen in an hour.
4.2.1930: Arrived Fleetwood and landed catch. Some minor alterations have to be made in the plant, but it has already proved a great success. Total cost of equipping was in the region of £10,000. The trawler is destined to fish in tropical waters, and is to leave Fleetwood for Cape Town, in the near future. Preserving fish in hot temperatures has always been a great drawback, but with the new development it is expected to overcome all previous difficulties, thanks to this new British invention. The trawler has been purchased by a newly-formed company, most of the capital having been subscribed in South Africa.
10.5.1930: Sailed Fleetwood for Las Palmas, Canary Islands to work out of the port; Fleetwood crew. On landing, the catch will be transferred to a refrigerated steamer destined for onward sale.
7.3.1931: Sold to Cape Fisheries Ltd, London. Albert V. Thompson, Fleetwood designated manager.
5.7.1931: At Blackpool County Court the Judge granted a petition on behalf of James Albert Johnson, ship broker and coal factor, for the compulsory winding-up of Islay Trawlers Ltd. He was supported by five other creditors.
1932: Delete manager. Vessel laid up at Santa Cruz de Tenerife.
16.3.1934: Reported that unfortunately the experiment ended in failure. It was difficult to locate fish and what was found was unsuitable, therefore the brine freezing plant was never properly tested under tropical conditions.
1934: Sold to Norwegian owners for conversion to dry cargo. Sale not completed.
8.8.1934: Fleetwood registry closed.
1935: No owner recorded.
19??: Sold to Rodriguez López, Santa Cruz de Tenerife. Boiler and engine removed for further use. Laid up at Santa Cruz between the coal barges and over the years deteriorated. Without boiler and engine no buyers could be found.
1945: Lengthened to 40,79m (133.8 ft) 230g 105n.
1945: Sold to Eduardo Coll Diaz, Santa Cruz de Tenerife. Sailed Santa Cruz for Las Palmas in tow of ex steam yacht AGUILA de ORO (222grt/1877) for slipping, lengthening, modernisation, and fitting an oil engine. On completion registered at Santa Cruz de Tenerife as GINES CERDÁ. Fished the Canary-Saharan bank, landing at Las Palmas/Santa Cruz.
1945: Converted to motor trawler at Las Palmas, Tenerife, Canary Islands.
Re-engined with 6-cyl oil engine by Motoren Augsburg Nürnberg A.G. (MAN), Nürnberg
19??: Re-engined with 600bhp 8-cyl oil engine by La Maquinista Terrestre y Mar (MTM), Barcelona
1960s: Sailed on the fishing grounds as mother ship with the last of the schooner and sloop rigged well boats.
1974: Broken up in the Fish Dock at Santa Cruz de Tenerife, Canary Islands. 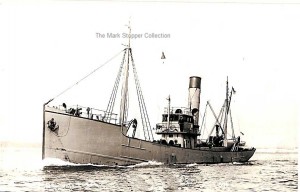