11.5.1911: Launched by Smith’s Dock Co Ltd, South Bank-on-Tees, Middlesbrough (Yd.No.471) for The New Docks Steam Trawling Co (Fleetwood) Ltd, Fleetwood as CLARA BELLA.
15.6.1911: Registered at Fleetwood (FD138).
6.1911: Completed at a cost of £7,881 and insured for £7,000. Ernest Tomlinson appointed manager.
29.6.1911: At Fleetwood landed from first trip.
26.1.1914: Sailed Fleetwood for Icelandic grounds (Sk. Harry Kluver); thirteen crew all told.
Early 2.1914: Reportedly seen by Grimsby trawler SWEEPER (GY853) (Sk. James Westerby), five or six miles SW of Reykjanes Peninsula, SW coast of Iceland.
14.2.1914: Seen anchored at the entrance to Onundafjord, west coast of Iceland by Sk. Henry Steel of steam trawler INAWILLIAM (GY872) which, with other trawlers, was sheltering from extreme weather. Later same day at about 5.00pm. when weather lifted she was not seen. Assumed that she had left to resume fishing though the weather closed immediately and continued with heavy easterly gales, continuous snow storms and icing for a further ten days.
1.3.1914: Missing from this date.
19.4.1914: Memorial service held at the Fielden Sailors Rest.
29.4.1914: At Lloyd’s “… put up for inquiry as very much overdue”.
6.5.1914: At Lloyd’s “… posted as missing”.
8.5.1914: Fleetwood registry closed.
15.5.1914: At the Preliminary Inquiry by the Board of Trade held at Fleetwood (No.175), the Inspector to the Board of Trade concluded that “There is no evidence as to the cause of the “Clara Bella” not having been heard of since she was last seen in Iceland by the skipper of the INAWILLIAM. I am of opinion, having regard to such evidence as was available, that she left the Onundafjord about 4 p.m. on February 10th, during a lull in the bad weather then prevailing there, and that she was overtaken by the easterly gale with thick snow which shortly afterwards came on. During this blizzard she probably collided with ice (quantities had been sighted off the fiord the same day), and foundered before the crew had time to adopt any means to save themselves.

The last sightings of the CLARA BELLA were by the Grimsby trawlers (INAWILLIAM, the SWEEPER, and the CHALCEDONY). The INAWILLIAM put in for shelter in an Onunderfjord off the west coast of Iceland on February the 10th 1914. There were many trawlers sheltering there due to the extreme weather conditions at the time and most of the vessels were encased in ice.

The Skipper, Henry Steel, recalls seeing a Fleetwood vessel anchored near the entrance of the Fjord. He remembered it because at the time, he had thought it was a bit of a novelty to see a Fleetwood trawler at the Icelandic fishing grounds. Skipper Steel went on to say that two hours later there were slight breaks in the snow storms and that is when he noticed that the Fleetwood trawler had disappeared. He concluded that they had possibly ‘Slipped out to try for fish’. He told the Board of Trade enquiry, ‘The weather thickened again almost immediately and continued with heavy easterly gales and continuous snow storms for the next ten days’.

James Westerby, Skipper of the Grimsby trawler SWEEPER, said he saw the Fleetwood trawler in early February off Csar Bay, five or six miles South-West of Rykgaves on the South-West coast of Iceland. Why the CLARA BELLA had left was not known, but no trace of her had been found since, nor had any wreckage been found. The presumption was that either she had gone down in the blizzard or she might have struck a rock or floating ice.

Board of Trade Enquiry

The Secretary of the New Dock Steam Fishing Company – Joseph Allen Taylor, said he was satisfied that the vessel sighted by the Grimsby trawler SWEEPER must have been the CLARA BELLA. The conclusion he came to was that the skipper of the CLARA BELLA tried to resume his fishing during an interval in the rough weather and had probably struck a rock or some floating ice during the blizzard which had continued for sometime after he left.

In another write up of the Fleetwood Chronicle dated March 24th 1914, the President of Hull Fishing Vessel Owners Association states, ‘that the trawler CHALCEDONY saw a Fleetwood trawler in Fara Bay on Sunday, March 1st. Later the skipper of the steam trawler, SWEEPER, which arrived in Grimsby on the 9th of March, reported having seen a Fleetwood trawler. And his description of the vessel he saw corresponds with that of the CLARA BELLA seen on Saturday the 28th of February. If the CLARA BELLA was sighted on March 1st she would have been at sea for thirty four days at that point.

The CLARA BELLA came to Fleetwood brand new. She was built in 1911 so was only three years old when she went missing. She was built at Middlesborough at the cost of £7881 and was insured for £7000. Her gross tonnage was about 299, and her speed ten knots. The CLARA BELLA was of standard design. The only difference from other trawlers being that she had an extra fish room aft and an extra bulk head forward. Her bunkers would take from 165 to 170 tons of coal and her ice capacity was about 35 tons. Her capacity for fish would be about 100 tons maximum. Dead weight calculated on freeboard would be about 279 tons. 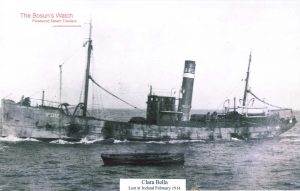