1899: Launched by Dundee Shipbuilders’ Co Ltd, Dundee (Yd.No.124) for The Grimsby Castle Line Steam Fishing Co Ltd, Grimsby as BALMORAL CASTLE.
8.1899: Completed as a well vessel.
25.8.1899: Registered at Grimsby (GY530).
25.8.1899: Robert W. Windeatt designated manager.
11.1907: New boiler by Blair & Co Ltd, Stockton.
6.1908: Sold to Stoomvisscherij Mij Friesland, IJmuiden through Maatschappij tot Beheer van Steamtrawlers en Andere Vaartuigen.
23.6.1908: Registered at IJmuiden as FRIESLAND (IJM16). A. G. Meeuwenoord Jnr & A. de Vries designated managers.
29.6.1908: Grimsby registry closed.
9.2.1909: IJmuiden registration withdrawn by Lord Mayor of Velsen on legal grounds; owners informed but did not agree.
5.1909: Sold to Arthur Smith, Grimsby.
5.5.1909: Registered at Grimsby (GY459).
5.5.1909: Alick Black designated manager. Converted to a trawler. Well closed by rivets. Fishing from Fleetwood.
20.2.1911: Arrived Fleetwood with 600 boxes of hake caught off the Moroccan coast, £600 – £700 gross.
1914: Sold to Henry Burns and W. Burns, Grimsby for the sum of £4,000.
12.1914: Requisitioned for war service and converted to a boom defence vessel (1-12pdr).
1917: Sold to The Zaree Steam Fishing Co Ltd, Grimsby for the sum of £9,000. Henry Burns designated manager.
9.1919: Returned to owners without being reconditioned, the company being allowed £3,630 for the necessary reconditioning work.
10.10.1919: Sailed Grimsby on first trip after reconditioning.
6.1920: Dry-docked for inspection, cleaning and painting.
12.1920: Laid up in Alexandra Dock which was also the timber pound.
6.5.1921: Manager ordered vessel prepared for sea, intending to make one trip to avoid dock dues. Engineering Superintendent, Mr Waddingham, advised dry-docking to inspect bottom but this was not pursued by the manager.
7.5.1921: Steam raised.
11.5.1921: Insured with Lloyds for the sum of £10,000 for one month from this date. Book value £6,000.
12.5.1921: Sailed Grimsby at 9.30am. for North Sea grounds (Sk. Henry Ormonde); ten hands all told. Weather fine, sea calm and slight SE breeze. Shortly after noon, deckhand Anderson went into the engine room to see his friend the 2nd Eng and noticed water in the bilge and the engine connecting rod bottom ends were splashing in water as they revolved. The 2nd responded saying, “Yes, the ship is leaking”. The water ingress was not reported to the skipper. At dinner shortly after 1.00pm. the third hand asked the 2nd how the ship was going and he replied, she was “ leaking like a basket”. The third hand asked if it was a case of going back but the 2nd replied that he did not know. This conversation was confirmed by others present. The skipper was not informed. At 2.00pm. the trimmer, John Love, who had listened to the conversation after dinner went into the engine room to get a lamp and observed that the cranks were splashing around in the crank pit. At 3.45pm. the Ch Eng noticed a knocking in the high pressure crank bearing and asked the second hand who was on watch to stop the ship so he could inspect and tighten up. The nuts were tightened, and the engine restarted but after about twenty minutes the 2nd called for the Ch Eng. and on arriving in the engine room saw that water was rushing in. The ejector and the donkey pump was started but the water was quickly over the plates and the shipside valve for the ejector was under water and could not be opened up. In the stokehold the water had risen so much that the boiler could not be fired. The skipper was called and on seeing the amount of water, knee deep over the engine room plates, ran on deck and by steam whistle and flag signalled the steam trawler NAIRANA (H528) which had just overtaken them, to come to their assistance. The NAIRANA some three miles away immediately turned and came within hailing distance. The crew had set to work with the hand pump and buckets but were quite unable to deal with the ingress of water. The water rose and put out the fires and shortly after the engine stopped. The NAIRANA came alongside, connected and for about three-quarters of an hour towed towards the coast but the vessel started to settle and the skipper thought it advisable to let go the tow line and he and the crew got into the boat which they had previously turned out. At about 6.15pm. they all boarded the NAIRANA. At about this time the Hull trawler TANJORE (H759), homeward from the fishing grounds came on the scene. The three skippers and the mate and Ch Eng of the FRIESLAND went back onboard but it was evident that nothing could be done to save the ship. At about 7.30pm. the FRIESLAND foundered sinking stern first in position about 25 miles NE1/2E from Spurn lightship. The crew transferred to the TANJORE and proceeded to Hull, the FRIESLAND crew later transferring to the Grimsby trawler ELITE (GY100) which landed them safely at Grimsby with most of their belongings.
12.5.1921: Grimsby registry closed. “Vessel foundered”.
5.9.1921: Following the formal investigation held at Grimsby (S.346), the Court found that the FRIESLAND was lost by foundering in consequence of the inrush of water, the cause of which the Court is compelled to leave undetermined. The Court also considers Mr. Henry Burns to blame for not accepting Mr. Waddingham’s suggestion that she should be dry-docked and thoroughly examined before she went to sea and ordered him to pay £200 towards the costs of the Inquiry. The Chief and 2nd Engineers deserve severe censure for not having informed the skipper that the vessel was making water at a much earlier time than they did. Their default in this matter greatly reduced the chance of the vessel being turned round and regaining the land before foundering. 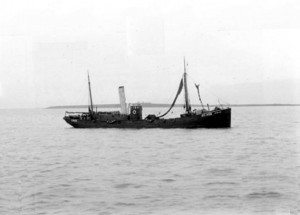