1829: Completed at Burscough Bridge, Lancashire as Alice.
16.12.1851: Appropriated.
16.04.1855: Registered at Fleetwood. Owned by John Calder (Sk. Sam Colley) About 1869: Fishing the Calf grounds, SW of Calf of Man (Sk. Sam Colley) along with six or seven other boats and landing into Holyhead. Reputed to be the first skipper to place hake on the Manchester Wholesale Fish Market through agent Theophilus Handley.
By1870: Fleetwood registry closed. Owned by Robert Jones, 7 Eastgate Street, Carnarvon. Registered at Carnarvon.
1890: Not recorded in MNL under this name.

1860: Launched by Robert Wright, Freckleton for John Noblett, Fleetwood as NIMBLE.
8.1.1861: Registered at Fleetwood.
10.8.1863: At Blackpool Petty Sessions, seven fishermen, Peter Leadbetter (ALICE); James Wilson (BRAZEN NOSE”); Richard Wright (ELIZABETH); William Ball (EMMA); Nicholas Leadbetter (MARY ELLEN) and Richard Roskell (NIMBLE), had summonses issued against them for illegally landing and having onboard their vessels quantities of oysters, during a prohibited time of the year. Richard Roskell giving evidence maintained that they could not avoid catching these oysters which damaged their nets, and that they were not the type of oysters forbidden in the Act. After legal argument the cases against William Ball, Peter Leadbetter, Richard Roskell and James Wilson were dismissed with costs; Nicholas Leadbetter and Richard Wright were each fined 8s and costs.
20.8.1864: Took part in the class for trawl boats under 70tons at the Blackpool Regatta (Sk.Richard Roskelll) finishing in fourth place.
3.11.1864: At night the Fleetwood registered flat BRITON (29 regd tons/1841) (Capt Fairclough) while at anchor on Mort Bank off Walney Island was run down by the Belfast and Morecambe paddle steamer SHELBURNE (484grt/1860) (Capt Sully). The flat immediately filled and capsized but the steamer sustained little damaged and continued passage to Morecambe. The crew of the flat took to their boat and picked up the following morning by the NIMBLE and brought into Fleetwood.
10.11.1864: Fell in with the BRITON drifting about in Morecambe Bay and assisted the Fleetwood paddle tug WYRE (165grt/1862) to connect and deliver to Fleetwood.
7.12.1866: At about 2.30am when about twenty miles from Fleetwood Lighthouse, during severe gales that had raged all week, swept by heavy seas, breaking up the boat, carrying away the sails and washing the fishing gear overboard. Sk. Richard Roskell saw the heavy sea coming and shouted to warn the crew who were manning the winch, but they were unable to escape, William Ball (35) was thrown against the winch handles which came in contact with the lower parts of his body; Richard Rigley and William Wright were also severely injured. The skipper and remaining hand rigged a jury sail and endeavoured to make for Fleetwood, but owing to the heavy seas running and the damaged condition of the vessel they ran on into Piel and immediately sent to Barrow for medical assistant On arrival of the medical man it was determined that all three were in serious condition and should be moved ashore for treatment; William Ball declined to be moved.
8.12.1866: At about 10.00am sailed Piel for Fleetwood, Ball who had been in agony all night passed away on passage and on arrival a Fleetwood about 3.00 pm in tow of the paddle tug WYRE (Capt Swarbrick), he was conveyed to his home in Walmsley Street.
9.12.1866: At the inquest held at the Fleetwood Police Station, a verdict was returned “ That the deceased was accidentally killed on board the fishing smack NIMBLE, in a storm, whilst out at sea.. “
1869: Owned by Frederick W. Rigby, (64/64), Preston. Registered at Fleetwood (FD11).
10.10.1869: During the night on the flood tide. Parted her moorings on the south side of the river and drifted up with the tide and carried through the gap in the old railway embarkment fetching up on the Marsh. The following morning the owner who was prepared to take her to sea on the morning tide, found her missing. Searching about for some time she was discovered and brought back to her mooring on the following tide with only a small portion of her taffrail damaged; she proceed to sea on the same tide.
4.5.1879: The smack had been out for several days. In the evening about 10.05pm, Joseph Price, fisherman, was cutting cork when the knife slipped and entered his high up to the haft. The smack was immediately put about for Fleetwood and at about 4.00am in the morning Price was put in the punt off Danger Patch buoy and towed into Fleetwood. On arrival he was conveyed to his mother’s house in Cross street and Dr Porter attended. Price was very weak from loss of blood as he had severed an important artery. The wound was dressed and he was improving.
15.3.1884: Frederick Rigby died.
7.1884: Sold to Patrick Murphy, Swingpump Lane, Whitehaven. Fleetwood registry closed. Registered at Whitehaven (3/1884) (WN7).
1889: Sold to John Preston Peet, Whitehaven & others (John Preston Peet managing owner).
1890: Rebuilt and ketch rigged – 23 regd tons Employed coasting.
1892: Sold to John Wright, 12 Senhouse Street, Whitehaven & others (John Wright managing owner).
19.1.1903: Wrecked on Angus Rock, Strangford Lough, Co Down in approximate position 54 29N 05 37W, while on passage to Belfast, cargo vegetables.
1903: Whitehaven registry closed. 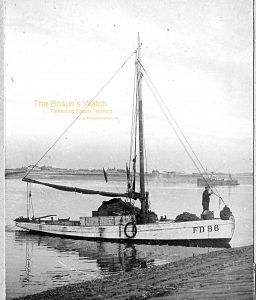