Additional information courtesy of Bob Baird, “Shipwrecks of the North of Scotland”.

24.9.1908: Launched by Smith’s Dock Co Ltd, South Bank, Middlesbrough (Yd.No.394) for The Melling Steam Trawling Co Ltd, Fleetwood as the LILY MELLING.
4.11.1908: Registered at Fleetwood (FD222). Henry Melling designated manager.
11.1908: Completed.
12.1914: Requisitioned for war service as a minesweeper (1-6pdr) (Ad.No.400). Based Stornoway.
26.9.1915: At 1.20 pm. Base received a W/T S.O.S. from HMS CARIBBEAN (5825grt/accomodation ship) on passage to Scapa Flow, in a heavy NE gale off Cape Wrath taking in water. At anchor in Loch Inchard, ordered to sail along with armed trawlers PRINCESS ALICE (Ad.No.2655) (SN15), IJUIN (Ad.No.2669) (CF35) and two armed yachts. Due to stress of weather yachts turned back and the three trawlers arrived at the casualty at 3.00 pm and stood by as crew of HMS CARIBBEAN attempted to stem ingress of water. At 9.00 pm. light cruiser HMS Birkenhead (P.No.9A) arrived on the scene but because of the weather could not approach to connect for tow. At midnight, with the casualty listing heavily to port it was decided to abandon and PRINCESS ALICE picked up some men swimming and one boat. With PRINCESS ALICE, boats from HMS BIRKENHEAD were towed to windward, allowed them to veer down on the casualty and together they took one officer and 45 men onboard bringing them to Stornoway.
27.9.1915: IJUIN stood by the wreck until she foundered at 7.15 am; fifteen men still missing. (Tug FLYING KESTREL (516grt/1913) ordered from Scapa had failed to find the casualty but took survivors from Stornoway to Scapa).
Post 12.3.1919: Returned to owner.
14.11.1919: Sold to Thomas F. Kelsall, Henry Robertson & Henry Blackburn, Fleetwood (Henry Blackburn, managing owner).
15.2.1920: Sold to Selby Trawlers Ltd, Fleetwood ( Henry Blackburn, manager).
12.3.1929: On morning tide outward for fishing grounds, ashore west side of Wyre channel. Run into by steam trawler YARMOUTH (FD334) which grounded on a groyne.
3.12.1929: Ran aground in Islay Sound and abandoned as a total loss.
23.12.1929: Fleetwood registry closed.
1930: Salved and repaired.
1933: Sold to William Gove, Torry, Aberdeen (managing owner).
18.9.1933: Registered at Aberdeen as GARELOCH (A.276).
18.8.1935: Left Methil after bunkering (100 tons). In dense fog stranded at Billow Ness near Anstruther bathing pool.* Badly holed and declared a CTL; broken up in situ.
20.9.1935: Aberdeen registry closed.
16.12.1935: BoT formal inquiry at the Sheriff Court, Aberdeen.

August 19 1935* Ran aground near Anstruther bathing pool in dense fog on the morning of 18 August. She had loaded over 100 tons of coal at Methil and was on her way back to Aberdeen with a skeleton crew when she ran aground and was badly holed.
When the tide receded she heeled sharply over on her port side, and one member of the crew was thrown on to the rocks, sustaining two broken ribs. The trawler lay so close to the shore that a number of visitors to the swimming pool swam out and boarded the vessel. With the return of the high tide in the evening she could not be refloated.
Declared CTL and broken up in situ. A boiler at 5612°910N, 0242°430W recorded by Maritime Fife during the Coastal Assessment Survey for Historic Scotland, Kincardine to Fife Ness in 1996, may be all that remains of the GARELOCH. 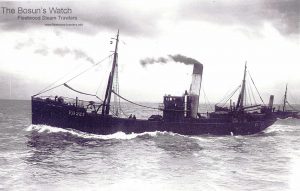 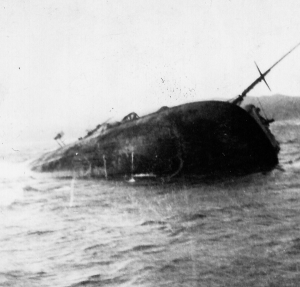 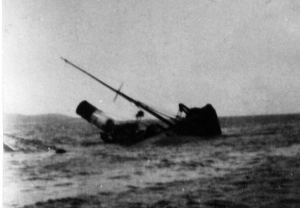 4.4.1906: Launched by Mackie & Thomson Ltd, Govan (Yd.No.330) for Soc. Anon Pecheries d’Islande, Ostend as J. BAELS-MAURICX.
4.1906: Completed. Registered at Ostend (O115). J. Baels designated manager.
15.9.1914-31.10.1915: Landing at Milford (Belgian crew).
11.1915: Sold to Armitage’s Steam Trawling Co Ltd, Hull.
11.1915: Ostend registry closed.
24.11.1915: Registered at Hull (H406). George T. Armitage designated manager. Fishing from Fleetwood.
3.1917: At Fleetwood. Fitted with Hotchkiss 6pdr gun (No.1557); complement increased by two gunners.
29.5.1917: Requisitioned for Fishery Reserve.
2.1918: At Fleetwood landed a catch of 800 stone from Iceland which grossed a record £7,000.
25.07.1918: Sailed Fleetwood for Icelandic grounds (Sk. George Cooke), senior ship, in company with MANNOFIELD (A526) (Sk. B. Hume, Blackpool) and NETTLE (GW11).
7.8.1918: Around noon, from a position off Vestmannaeyjar, streamed log and in company set course for home.
9.8.1918: At about 2.30pm. when some 63 miles NW of St. Kilda, sighted a submarine on the surface, which closed and when about 4,500yds away opened fire the shells falling ahead, either side and astern. Sk. George Cook ordered the NETTLE to keep clear and brought both trawlers round so that the guns could bear. Laying broadside the submarine brought all three of her guns to bear on the trawlers and again opened fire which was returned. Control of the trawlers’ guns was exercised from the bridge roof by the skippers and from men placed in the rigging of the main mast. After about an hour a shell pierced the bulwarks, the deck, boiler casing and the lifeboats of the J. BAELS-MAURICX and shrapnel wounding J. T. Boyaton, Ch Eng. in the head. About two hours into the battle, a shell exploded above the MANNOFIELD and shrapnel hit Sk. Hume on the head, although badly wounded and bleeding, he bandaged the wound and carried on. A few minutes later a shell burst about a foot above the taffrail and shrapnel fell all around the gun severely wounding the MANNOFIELD second gunner. A little while later a shell struck the J. BAELS-MAURICX on the port side, shrapnel went through the wheelhouse, breaking the windows, damaging the funnel and wounding gunner in the leg. About half an hour before the submarine’s final approach a shell pierced the shell plating of the MANNOFIELD close to the rudder and the ship started to take in water. Arrangements were made to transfer the crew to the J. BAELS-MAURICX but examination showed that although the cabin was flooded the vessel had stabilised. On the submarine’s third approach two rounds were fired by each trawler which were considered hits, resulting in the submarine breaking off the engagement. In total 36 rounds fired after the 31/2 hour engagement. Despite the damage to the MANNOFIELD, it was decided to proceed at best speed to Castlebay, Barra to seek medical attention and assess the situation.
10.8.1918: At Castlebay, the doctor tended the wounded and after discussion with the other skippers and bearing in mind the damaged trawler had already steamed 130 miles in a fresh breeze, decided to sail for Fleetwood, a distance of about 250 miles, keeping inside the islands; sailed for Fleetwood at 9.30pm.
12.8.1918: At 9.00am. passed Lune Buoy and came to anchor, proceeded to Wyre Dock on the afternoon tide and reported incident to Lieut. James A. Robertson OBE RNVR, Port Fishery Commander *.
5.9.1918: At the Wyre Dock Cafe a a luncheon was held presided over by Lieut. Robertson in his role as president of the Fleetwood Fishing Vessel Owners’ Association. This was followed by an address and presentation by Cdr Abbott RN of a gold watch and gold albert to each skipper and silver watches, all suitably inscribed, to all crew members of the three trawlers.
1919: Released.
11.1919: Sold to The Melville Steam Trawling Co Ltd, Fleetwood.
16.12.1919: Hull registry closed.
19.12.1919: Registered at Fleetwood (FD362). Herbert M. Johns designated manager.
26.11.1923: Sold to The Transvaal Steam Trawling Co Ltd, Fleetwood. Magnus B. J. Wedum designated manager.
4.5.1927: Homewards towards Lune Deep Buoy, picked up derelict “nobby” PLAYMATE (LL101)+, which had been abandoned on 3rd May, but had to release tow as boat started to settle and was observed to founder.
1.8.1928: Sold to John H. Lister & Harry L. Lister, Hartlepool.
12.8.1928: Fleetwood registry closed.
8.1928: Renamed ELEAZAR (HL31). Harry L. Lister designated managing owner.
1936: Sold for breaking up. Hartlepool registry closed.

* Following the commendation submitted to The Admiralty by Lieut. Robertson and endorsed by the Port Commander, Cdr. C. W. Muir RN, The Admiralty awarded Sk. Cooke and Sk. Hume the DSC and the gunners from both ships, the DSM.

+ Playmate, Sk. Richard Knowles and crew John William Corbett, had left Liverpool on 30th April for Douglas, IoM and the fishing season. In the evening of 1st May, after a rough crossing they were off Douglas, but a mist settled and obscured the harbour lights, so they were forced to lay off. At about 10.30pm a storm broke and the boat was in danger of being swamped. At about 2.00am the following morning the mast broke and they were helpless. Making signals of distress they were sighted by the Norwegian steamer ASGERD (1308grt/1924)(Capt Hansen). A boat was launched and the crew taken onboard and subsequently landed at Preston.