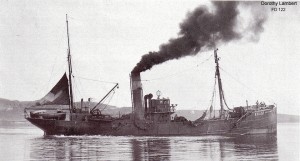 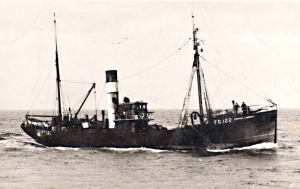 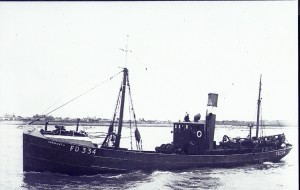 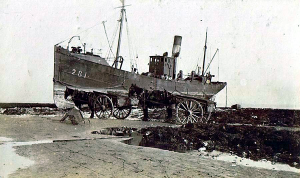 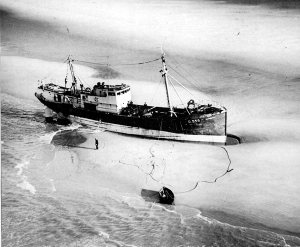 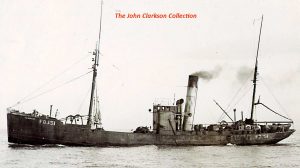 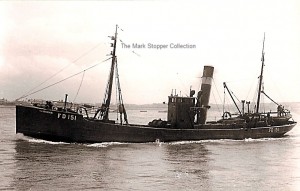 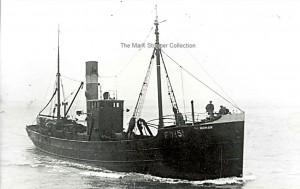 19.9.1907: Launched by Smith’s Dock Co Ltd, North Shields (Yd.No.358) for Neale Bros, Milford Haven (Wilfred Neale, Cardiff; Howard K. Neale, Morley H. Neale, Joshua S. Neale & Douglas E. Neale, Penarth) as SAXON.
10.1907: Completed (Morley H. Neale, manager).
29.10.1907: Registered at Milford (M211).
16.9.1909: In Bantry Bay (Sk. H. Hewer?), at about 4.00 am. in collision with Milford trawler CAYLPSO (M168) (Sk.Christopher Masterton). Sustained damage to stem and bow plating.
12.1910: Sold to Neale & West Ltd, Cardiff (Wilfred Neale, Morley H. Neale & Joshua S. Neale, managers).
15.12. 1910: Milford registry closed.
12.1910: Registered at Cardiff (CF31).
9.1914: Requisitioned for war service as a minesweeper (1-12pdr, 1-7.5” A/S Howitzer) (Ad.No.627).
1919: Returned to owner.
4.1919: Sold to The New Docks Steam Trawling Co (Fleetwood) Ltd, Fleetwood (Joseph A. Taylor, manager).
29.4.1919: Registered at Fleetwood (FD159).
17.7.1919: Sold to The Saxon Steam Trawlers Ltd, Fleetwood (Joseph A. Taylor, manager).
1924: William W. Brierley appointed manager.
8.1930: Sailed Fleetwood for West of Scotland grounds (Sk. Arthur Christie): twelve crew all told.
21.8.1930: Fishing off Barra Head, decided to change grounds and set course for the Cairns of Coll off Tiree. With the skipper, mate, James Compton and a deckhand Samuel Harringham in the wheelhouse in gale force winds and a blinding rainstorm with visibility reduced, stranded on Hough Skerries, Tiree. Vessel was held amidships on the skerry and despite working the engine was held fast. The mate, with Samuel Harringham and George Stables volunteered to man the boat and lay out a kedge and in the rough seas it proved very difficult and once set took over an hour to pull back the 200yds to the trawler. Shortly after their return the Ch. Eng came on deck and said that the engineroom was flooding and the position was hopeless. The skipper ordered the crew into the boat and they pulled away for the shore which they could barely see through the slanting rain and rough waters. After pulling for five miles they landed on a Tiree beach where there were no rocks and although exhausted started to walk to Kilkenneth.
22 – 25. 8.1930: Broke up in heavy swell. Declared a total loss.
8.9.1930: Fleetwood registry closed “Totally lost 21/8/30”.