24.11.1904: Launched by Cook, Welton & Gemmell, Beverley (Yd.No.64) for The Imperial Steam Fishing Co Ltd, Hull as Gaul (H761).
30.1.1905: Registered at Hull (H761).
2.1905: Completed Frank Orlando Hellyer & Owen Stooks Hellyer designated managers.
7.2.1908: Sailed Hull for the fishing grounds of Faxe Bay, Iceland (Sk. William Ernest Lowrey); twelve hands all told.
12.2.1908 arrived off Utakalar Light and commenced fishing.
16.2.1908: Off Utakalar headland in clear weather but dark, with light wind ENE. Ceased fishing and crew repairing/prepairing nets, skipper at breakfast, ship in charge of spare hand, James Smith. Engine at slow steering SW. The fishing lights were left burning. At approximately 0730 a vessel was observed close to on the starboard bow. Smith immediately rang full astern and on hearing the telegraph the skipper returned to the bridge and a moment later the GAUL struck the port side of the trawler midships. The trawler was the LORD ROSEBERY (H537) (Unnamed Swedish skipper), which had been driving before the wind as the crew repaired the nets. With the LORD ROSEBERY taking in water and having lost their boat on passage to Iceland, the GAUL launched her boat and the crew was taken off. Shortly afterwards, with some members of both crews, returned to the LORD ROSEBERY by boat to assess the situation. The damage to the shell plating was a foot above the waterline but with coal in the after end of the ice room and WT access door open, the ship was filling rapidly. Preparations were made to take the LORD ROSEBERY in tow and the warps were secured aft. Remaining men were taken off and tow commenced towards land but after a short time she started to settle. The warps were cut and LORD ROSEBERY foundered almost immediately in the vicinity of Cape Utskalar Light, Faxe Bay, some thirty-five to forty minutes after the impact. The crew of the LORD ROSEBERY were landed at Reykjavik and later returned to Hull in the steam trawler COLTMAN (H973). At the formal investigation (S.251) held at Hull, the Court found that the collision and subsequent foundering of the LORD ROSEBERY was caused by the GAUL having a bad look-out and not keeping out of her way. It would have been avoided or its severity lessened if the LORD ROSEBERY had also not had a bad look-out. The Court found the the skipper of the GAUL, William Ernest Lowery and the second hand of the LORD ROSEBERY in default. In view of Sk. Lowery’s excellent character, his certificate was suspended for three months, while some blame was attached to spare hand James Smith. The second hand of the LORD ROSEBERY was severely censured.
22.2.1908: When entering Hafnarfjörður, in clear visibility, came fast on Helgasker shoal. Came off under own power but stripped propeller in process and as a result drifted ashore. Danish rescue tug SVAVE (156grt/1907) (Tn. Ibsen, master) on scene and succeeded in refloating. Towed into Hafnarfjörður to await arrival of replacement propeller from Britain.
5.3.1908: Towed to Reykjavik by SVAVA for repairs.
18.5.1908: At the formal investigation (S.251) into the loss of the LORD ROSEBERY held at Hull, the Court found that the collision and subsequent foundering of the LORD ROSEBERY was caused by the GAUL having a bad look-out and not keeping out of her way.
2.1915: Requisitioned for war service as a minesweeper (1-12pdr, 1-7.5” A/S Howitzer) (Ad.No.733).
3.11.1917: Sold to The New Docks Steam Trawling Co (Fleetwood) Ltd, Fleetwood. Joseph A. Taylor & Ernest Tomlinson designated managers. Based Humber.
Post 12.3.1919: Returned to owner at Fleetwood.
8.4.1919: Hull registry closed.
9.4.1919: Registered at Fleetwood (FD143).
1924: William W. Brierley designated manager.
1925: Chartered by Hellyer Bros Ltd, Hull for use in reconnoitring for ice fields, marking boundaries, fish carrying, etc in the halibut fishery in the Davis Strait, Greenland.
2.1926: Chartered by Andreas Goodmundsson, Leith to carry fish from Iceland to Grimsby.
27.3.1926: On completion of charter, sailed Grimsby for Fleetwood north about with a scratch crew (Sk. Karl Johnson); nine crew in all.
30.3.1926: In heavy weather driven on submerged reef in Ballevullin Bay, NW Tiree. *Crew took to boat which overturned; seven men lost, two reached the shore.
29.7.1926: Fleetwood registry closed on advice from owners. 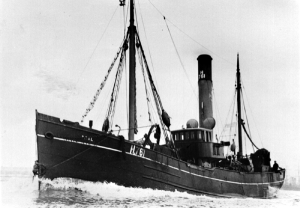 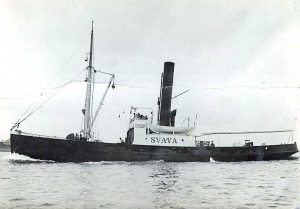