14.12.1898: Launched by Edwards Brothers, North Shields (Yd.No.599) for The Excalibur Steam Fishing Co Ltd, Grimsby as SIR GALAHAD.
2.1899: Completed.
6.2.1899: Registered at Grimsby (GY1043). Henry Smethurst designated manager.
3.1909: Sold to Christian M. Evensen, Hull & Tórshavn, Faroe Islands.
4.3.1909: Grimsby registry closed.
3.1909: Registered at Tórshavn, as FINSEN (TN232) to enable vessel to fish in restricted British waters, etc.
31.8.1910: At Fleetwood landed 30 boxes (6 boxes soles).
9.12.1910: At Fleetwood landed 45 boxes, (4 boxes soles and 150 brill.
3.1911. Sold to Alick Black, Grimsby.
9.3.1911: At Fleetwood landed 50 boxes (3 boxes soles).
9.3.1911: Registered at Grimsby as LINDUM (GY619). Alick Black designated managing owner. Fishing out of Fleetwood.
1.4.1911: At Fleetwood landed 100 boxes.
3.1913: Sold to Walter H. Beeley & others, Grimsby. Walter H. Beeley designated managing owner.
1.1.1914: Tonnage altered to 61.26 net under provision of Merchant Shipping Act 1907.
24.7.1915: Fishing some 53 miles E off Spurn in company (Sk. George Staples). At 11.00am witnessed steam trawler PERSEUS (GY 445) (Sk. John Constantine) some four miles away, lifted clear of the water by explosion having struck a mine. Hauled gear and with steam trawler VENTNOR (GY293) arrived on scene. Both vessels launched their boats to search amongst the wreckage. The body of the skipper, who was apparently still alive when he entered the water but died shortly after, was recovered by the LINDUM along with that of the mate, William Edward Picket. The PERSEUS picked up the body of deckhand George Christopher Monkton and he was transferred to the LINDUM.
25.7.1915: Arrived Grimsby and bodies landed.
11.1915: Sold to Isaac Bennett & others, Grimsby. Isaac Bennett designated managing owner.
8.1916: Sold to Alfred Stringer, William Stringer, Walter Stringer, Herbert Stringer and Harold Stringer (64/64 joint owners), Boston.
14.8.1916: Grimsby registry closed. Registered at Boston (BN61). Alfred Stringer designated manager.
26 9.1916: Sailed Boston for North Sea grounds off Flamborough Head (Sk. Charlie Baker); nine hands all told.
3.10.1916: At about 6.00am. moved to fish the Scarborough grounds fishing en route. At 4.20pm hauled the trawl and position estimated as ENE off Scarborough, distance about 11 miles. Secured trawl gear and at 4.40 pm set course south, to clear Flamborough Head 4 miles. At full speed making about 8 knots in hazy weather, but clear to see 3 to 4 miles, sea smooth, no wind. Several trawlers passed northwards some inshore, the skipper hailed one, PETREL (GY609), and asked what distance he had run but could not hear the reply. The skipper left the wheelhouse at 5.50pm. after relief by the third hand Ernest Wharman, told to steer south he had with him a deck hand, keeping lookout through the starboard bridge windows. At 6.40pm, he was relieved by the second hand, Charles Henry Burman, and a deck hand, Thomas Reader. At 6.55pm. a large black buoy was sighted on the starboard beam and passed at a distance of about two ships lengths. Wharman left the bridge and reported to the skipper who told him to proceed on a southerly course. At about 7.15pm. the look out asked what the black mass ahead was, the second hand looked through the glasses and seeing that it was land, immediately rang full astern, but before the engine room could obey the vessel struck the rocks heavily. The skipper came on the bridge, the engine was stopped and pumps started, but the vessel was making water so fast that the pumps could not cope. The water found its way into the engine room and the fires were put out. Settling by the stern and also taking on a heavy list there was likelihood of capsize. The order was given to launch the boat and at about 7.40pm. the whole crew abandoned the vessel in the boat. The trawler had stranded at Thornwick Bay at the extremity of the headland known as Thornwick Nab to the N of Flamborough Head and with a sea breaking heavily against the rocks through a ground swell, it was too dangerous to try to land. The boat therefore headed seawards and at about 11.0pm. they were picked up by the Grimsby steam trawler Rameses (GY715).
4.10.1916: Survivors landed at Grimsby. Boston registry closed.
22.12.1916: At the formal investigation at Grimsby (No.S340) into the loss of the steam trawler Lindum, the Court found skipper Charlie Baker in default and suspended his certificate for a period of six months with £20 costs. The stranding and the loss of the Lindum was not caused by any wrongful act or default of the second hand, Charles Henry Burman. Subsequently the trawler slid off rocks into about 9m of water off Thornwick Nab. The wreck is well broken up. 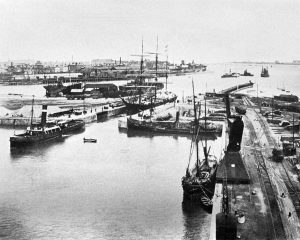