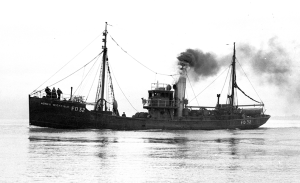 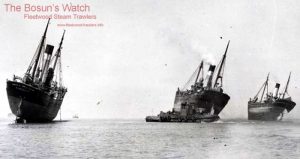 “Afterwards I directed the boat to the steamer which was named VIKTORIA with port of registry Fleetwood and sank the vessel with an explosive charge. 4 survivors of the crew of which 3 were in the sea and 1 on board of the steamer were taken onto our boat. The captain and 5 crewmen were killed by gunfire. The survivors stated that after the first warning shot they asked the captain on their knees to stop. He rejected having the opinion that he could manage to escape.

I think it is most probable that only the captain knew the purpose that the vessel was acting as a guard vessel. The whole behaviour in any case makes it obvious that it was a guard vessel which fulfilled also fishing duties. It is very remarkable that although the steamer received a lot of hits with inner and head ammunition it didn’t sink. It was obvious that the effect on the steamer was extremely devastating.”

“07.04h Voyage continued. After the beginning of the dark voyage continued under water to give the crew relaxing time.”
“02.06.1915 South of St George channel, cloudily, good sight. Emerged. On the horizon a couple of trawlers came into sight which are apparently doing fishing work.”

“06.25h A trawler comes close to us so that he can be reached by gun. It was ordered to stop. Also on this occasion the steamer stops only after he receives the first hit from our gun. The crew and the 4 crew members from VIKTORIA were placed into the dingi to send to the closest fishing vessel. The steamer which was named HIROSE from Cardiff was sank by explosive charge 49.50N x 07.10W.”

“Also the action of the captain of this steamer gives a doubtful impression. He stated that he didn’t stop after our first warning shot because he didn’t realise that a submarine was there. This can be excluded as the distance was only 30hm.”

The Milford Haven trawler VICTORIA and the Cardiff trawler HIROSE have been sunk off the Scillies by a German submarine (believed to be the U 34), the former on Tuesday and the latter on Wednesday. In the case of the VICTORIA five men and a boy were killed by shell fire. The survivors from both vessels, numbering 14, were landed at Milford Haven on Thursday night by the Cardiff steamer BALLATER.

The VICTORIA carried a crew of nine and a boy named James Jones, who was out with her on a pleasure trip. Of these only George Huddlestone, deck hand; John Craig, third hand; Clem Franklin, boatswain; and George Scriven, of Yarmouth, second engineer, survive. Huddlestone states that they were about 130 miles off St. Anne’s Head on Tuesday evening when a shot came overhead smashing their small boat. The boy Jones was sent on the bridge and the crew lashed some boards into a raft. A second shot killed the boy.

The skipper, Steve Stephenson, went forward and was talking to the chief engineer, Albert Cole, in the forecastle doorway, when a shell killed them both. Huddlestone was struck on the arm and hand by shrapnel and fell down the forecastle ladder. Another shot blew off both the legs of the mate, Dennis McCarthy, and another broke both the legs of the trimmer, Frank Slade, of Haverfordwest.

Four survivors, with George Rudge, of Milford, the cook, got aboard the improvised raft, but Rudge was drowned. The other four were taken aboard the submarine and kept there throughout the night. They were treated courteously and the doctor dressed Huddlestone’s wounds, remarking that England started the war. In the morning bombs were put aboard the VICTORIA and she went down head first when they exploded.

One of the most appalling submarine outrages which have been perpetrated in the Western and Irish waters amongst small craft was reported at Milford Haven on thursday night, on the arrival of the cargo steamer BALLATER of Liverpool, and owned at Cardiff. A boatload of men was put ashore at Milford Docks they were all humble fishermen, who were ruthlessly attacked by a German submarine, for two successive days and their vessels sunk.
This time the identity of the submarine was clearly established as U-34. Four of the men were Survivors of the Milford Trawler VICTORIA, and ten were crew of the Cardiff trawler HIROSE.

The VICTORIA Left Milford On Tuesday Week, And Was Fishing When Attacked, The Crew Consisted Of.

The four survivors of whom Huddlestone was wounded, were almost too grief stricken to relate their awful experiences. But a Western Mail reporter was able on seeing each to put together a consecutive story.
The VICTORIA was due back at Milford on Wednesday, after being out fishing a week, when on Tuesday about five P.M. some 130 miles west-south-west off St Anne’s Head, the booming of guns was heard, it was thought to be from a patrol, soon however they were disillusioned, for a shot came on the trawler, knocking one boat to pieces. A submarine was then suspected, and the skipper ordered the men to bind up boards to form a raft ready for emergencies. Another shot came quickly, knocking the bridge and killing the boy Jones.

Shortly afterwards Skipper Stevenson and Engineer Coles shared a similar fate whilst discussing matters near the forecastle. By the same shell Huddlestone was hit down the forecastle ladder and received injuries. It is believed the Skipper’s head was blown off, and Mate Mccarthy had his two legs blown away, the Trimmer had his legs broken. Meanwhile Rudge, Cragg, Scriven and Franklin got a raft afloat, and only Huddlestone was left aboard. He scrambled and saw that the submarine had come alongside. The Germans got him aboard and sent men with bombs aboard the VICTORIA and blew her up.

After one and a half hours he saw his companions in the water, and directed the German’s attentions to them, and they were rescued except Rudge, who floated past with a lifebelt on. The four men were left aboard the submarine all night most of the time, they said, submerged. One officer spoke fair English, and remarked “England Started The War”.

He was courteous, but the senior officer was repulsive. Next morning they were hailed on deck and told to get ready and board another boat which came from another trawler, which they sank in a similar fashion, bombs being taken aboard. Afterwards the crew and the VICTORIA’S men were left at the mercy of the waves. They had around 24 hours in drenching rain and wind, and were picked up by the BALLATER as stated.

The crew of the Cardiff HIROSE, belonging to Messrs, Neal and West, left Cardiff for the fishing grounds on Tuesday with a crew of ten, all Cardiff residents, many with families. Their names were

The men were escorted to the John Cory Sailors Rest and fed. Said one of them “We can do with it. The Germans gave us six biscuits between fourteen, and we were 24 hours in a storm tossed little boat.”
The Skipper said he was fired on without any warning, and corroborated the statements of the survivors of the VICTORIA. One of the crew stated that they would be 130 miles off Lundy when they were fired on, and something like 30 shots were fired altogether. The HIROSE, however, escaped injury until the Germans came up to them, then they soon took steps to seal her fate.
They did not attempt to kill the men, and temporarily took them aboard the submarine. It was then they found the men off the VICTORIA.

The Germans did not say much, but the Commander was inclined to sneer at them and was rather sharp. He sent some of his men aboard the HIROSE with bombs, which they fired and returned. The trawler did not go under so easily, whereupon the commander ordered two shots to be put into her amidships, and these sunk her.
Afterwards they were put back into their lifeboat with four of the VICTORIA’S survivors and cast adrift, with the mocking gift of six or seven biscuits and not a drop of water. Bad weather came on, rain driving against them, and a strong wind all day. They rowed without attracting the attention of any passing ship, and all night long until the next day (Thursday).
The VICTORIA was sunk 1st June 1915. A Cardiff trawler skipper later lost his ticket for a number of years for failing to stop and pick up the survivors. 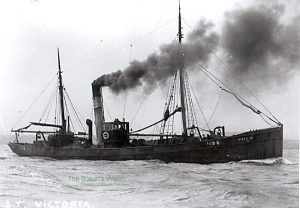