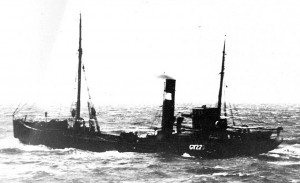 (Note: “Lieut. A. J. Coles RNR and Lieut. A. Bean RNR “SEAWARD HO” rendered good Service on Folkestone Gate, when traffic route had to be diverted at a moment’s notice”.) 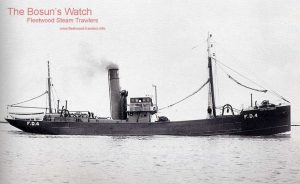 Notes: On 28 March 1916 two sailing ships, two steamers and the minesweeper BRACKLYN went on Corton Beach, off Great Yarmouth, in bad weather. The Lowestoft lifeboat, KENTWELL, was launched but the weather was so bad that no crews could be found and it is doubtful if they could have been taken off because of the weather.
When the weather eased the KENTWELL was towed down to one of the schooners. When they arrived they found that the coastguards with their rocket apparatus had rescued all the crews with the exception of that from the ship nearest Hopton. The Gorleston lifeboat, MARK LANE, had got them. When they returned, George Ayers the 2nd Coxswain who was in charge, was asked to go out to the minesweeper. They went out and helped the tug LOWESTOFT to get her off the beach. Later in the year an award of £40 for salvage was received.
Having survived this it seems ironic that BRACKLYN was subsequently lost to a mine.