Note: In August 1939 with the prospect of conflict in the offing, several trawler owners on both the East and West Coast recalled their vessels and delayed the sailing of others. Once War was declared, however, and with markets suffering from a lack of supplies, many trawlers returned to sea thinking that on the West Coast at least, the War might be slow to get under way. They were not to know that many German U-boats were already moving into positions to the West of Ireland and outboard of the Western Isles – both areas favoured fishing grounds of the Fleetwood trawling fleet. On Tuesday 12 September 1939, the Mount Steam Fishing Co’s DAVARA (FD152) commanded by Skipper William Boyles and a crew of eleven, sailed from Fleetwood for the West of Scotland grounds. In the early afternoon of Wednesday 13 September she was in a position some 21 miles NNW of Tory Island, County Donegal when she was closed by the U-boat, U.27 which with the deck gun manned, commenced shelling the DAVARA. Despite damage Skipper Boyles managed to get the boat into the water and with all the crew onboard the trawler was abandoned. The shelling continued for about half an hour and thirty five rounds were counted, the DAVARA sinking at 14.55. The crew were in the boat for five hours constantly baling and rowing and were exhausted when picked up by by the West Hartlepool steamer WILLOWPOOL (4815grt/1925) and landed safely. 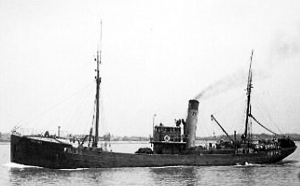 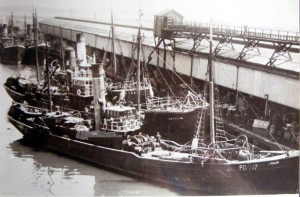