Note * – Hyskeir skerry at the southern entrance to The Minch SW of the island of Canna.

The body of William Nicholson, cook of the Fleetwood trawler DORIS, has been picked up off the coast of Skye, and this removes all doubts as to the fate of the vessel. From the condition of the body it is evident that the trawler was lost several days ago in one of the fierce storms that have recently raged off the western coasts of Scotland.

Wreckage comprising part of the wheelhouse, the lifeboat, and lifebuoys with the vessel’s name on them, and part of the deck fittings have been picked up. The DORIS, FD141, was a comparatively new vessel, having been built in 1907 by the John Duthie (Torrey) Shipbuilding Co of Aberdeen. She left Fleetwood on January 21 and had not been seen or heard of since.

In the faint hope that some of the crew may have reached one of the many uninhabited islands of the Hebrides and may be there stranded without any means of communicating with civilisation, 2 Fleetwood trawlers have been despatched by the FFVOA to make a search of the Hebridean waters.

Five wives and twenty children, in addition to a widowed mother, are dependent on the crew of DORIS. The lost trawler belonged to the Rossall Steam Fishing Company, of Fleetwood.

The sad news about DORIS recalls the mystery of BELOVAR, which twelve months ago sailed from Fleetwood, and from that day to this no tidings have come, either about the ship or the ill-fated men who sailed with her.

A Blackpool correspondent says :- In connection with the foundering of the Fleetwood steam trawler DORIS in the Hebrides with a crew of ten, a Blackpool man named Albert Clarke had a remarkable escape. Clarke intended sailing in the vessel and went on board, but at the last moment Skipper Wright declined to take him as he had not signed a clearance form. Clarke therefore transferred himself to another boat. The ship’s cook, George Nicholson, one of the drowned men, who leaves a wife and seven children, only transferred to DORIS at the last moment.

The skipper, William Wright, aged 45 of Burns Rd, Fleetwood, was making his first trip with the DORIS having been employed on another of the same company’s boats. He had been thirteen years at sea. He leaves six grown up children.

Reverend Frederick d’Heurter writes from St Joseph’s, Wesham, Kirkham, near Preston, to the Manchester Guardian :- Among the poor men who lost their lives in the wreck of the Fleetwood trawler DORIS is George Nicholson, cook, a member of my congregation. He leaves a widow with seven children all under nine years of age, in the greatest destitution, as they were totally dependent for support on the husband’s wage.

If you will kindly insert these few lines I pray and hope that some kind-hearted and charitable readers who might like to show their practical sympathy to the poor widow and fatherless little ones. All help sent to me for their relief will be gratefully accepted.

Notes from Bob Wilson
The trawler, DORIS, was lost with all hands in January 1914 off the Western Hebrides. The crew members were:

There was only one body found and that was of the cook, William or George Nicholson.

My Grandfather, James Patterson, was the Spare Hand on the CLARA BELLA. The Fleetwood Chronicle article of the time stated ‘a rather strange coincidence in connection with James Patterson, is that he is stated to have signed articles to have sailed with the ill-fated DORIS, but at the last minute, he changed his mind and went in the CLARA BELLA. The trawler DORIS foundered off the coast of Skye around January 22nd 1914 with all crew lost. My grandfather’s fate was sealed.
On 25th of March 1913, after the loss of the BELOVAR and NEW CROWN a disaster fund was set up to help the bereaved families – it paid out about £200 in twelve months. After the loss of the CLARA BELLA and the DORIS an appeal was launched by the fund ‘Urgent Help Needed’.
After researching the loss of the CLARA BELLA I can only conclude that there were a lot of contradictions in the various articles published in the Fleetwood Chronicle 1914. 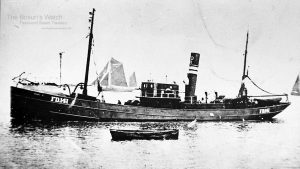 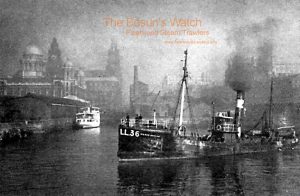