28.2.1895: Launched by Mackie & Thomson, Govan (Yd.No.94) for Hull Steam Fishing & Ice Co Ltd, Hull as SARK.
14.3.1895: Registered at Hull (H272).
3.1895: Completed. Henry Toozes appointed manager.
1903: On hire and fishing out of Scarborough (Sk. Sid Smith).
1909: Hire completed returned to owners.
1909: Sold to Charles Finlay Paton, Glasgow.
9.6.1909: Hull registry closed.
6.1909: Registered at Glasgow (GW25). Charles Finlay Paton designated managing owner.
1912: Sold to Patons’ Trawlers Ltd, Glasgow. Charles Finlay Paton appointed manager.
1.1.1914: Tonnage altered to 145grt 57net under provision of Merchant Shipping Act 1907.
1916: Sold to Noah Ashworth, Rowland Morris & Ernest Taylor, Fleetwood. Ernest Taylor, Thornton designated managing owner.
29.5.1917: Requisitioned for Fishery Reserve. Fishing from Aberdeen with local crew.
1919: Released.
7.1919: Glasgow registry closed.
16.7.1919: Registered at Fleetwood (FD224).
1920: Fishing out of Aberdeen.
4.11.1920: Sailed Aberdeen for North of Scotland grounds (Sk. Harry Hake); ten crew all told.
14.11.1920: In heavy weather and westerly gale on Butt of Lewis grounds, became disabled with net and trawl warp round propeller, despite efforts could not free. Steam trawler DIANA (A148) responded to distress and with great difficulty connected and commenced tow to Loch Eriboll for shelter and to remove obstruction when weather improved.
15.11.1920: Anchored in the loch.
16.11.1920: Wind veered to NW increasing to severe gale and vessel started to drag and slowly drove towards the rocky shoreline on the east side of the loch. Nearby the DIANA was swept by heavy seas and lost her trawl overboard and was only able to keep off the shore by working her engine. As the SARK moved closer to the shore, Sk. Hake decided to abandon and crew took to the boat but after pulling away boat capsized throwing the crew in the water. All except the skipper and the fireman, Daniel McSweeney, landed on the shore. A search was made for the two men but to no avail. After resting the survivors started to walk across the moor in search of habitation and met a shepherd, John M’Kay who took them to his home, Heilam House, on the Eriboll Estate and gave them food and dry clothing.
18.11.1920: Second fisherman and others returned to vessel and found her high and dry in a cleft in the rocks, upright but with stern post broken and shell plating holed and torn away on port side. Salvage considered unlikely. Looked again along the shoreline for the two missing men.
22.11.1920: In the evening, eight surviving crew members arrived back in Aberdeen.
3.12.1920: Abandoned as a total loss. Wreck lies in position 58.51 04.39.
19.1.1921: Fleetwood registry closed “Vessel wrecked”. 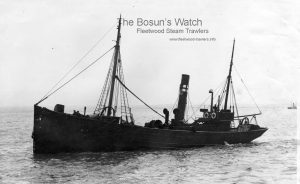 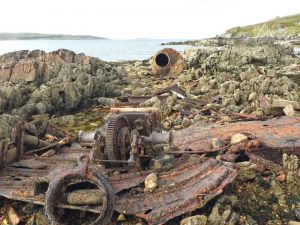