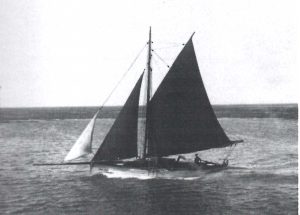 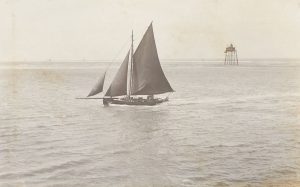 1865: Completed at Jersey possibly by Charles W Aubin, Gorey, as Harriet possibly an oyster smack.
11.10.1865: Registered at Jersey.
11.10.1865: Appropriated.
By 1870: Owned by Charles Auger, Burnham, Essex. Registered at Colchester (CK59).
1872: Sold to George Maskell, Brightlingsea.
1879: Sold to Robert A. Dawson, 20 East Beach, Lytham and George Maskell, 25 London Street, Fleetwood.
24.9.1881: Took part in the Fleetwood Regatta, Trawl Boat Race, (Sk. George Maskell) in wet and hazy weather. OYSTER GIRL (FD115) (Sk. William Coulborn) was favourite, leading at first but soon overtaken by GRATITUDE (FD156) (Sk.Richard Johnson). Finished third (£3).
25.9.1883: Sailed Fleetwood for the fishing grounds (Sk. David Herbert, crew, T. Lennox, J. Smith and Sam Colley.
26.8.1883: Running for home In gale force winds, squally rain and heavy seas. About noon came off the wind and while the crew were engaged in taking a third reef in the mainsail, the forestay broke allowing the mast to break and fall over the stern. Smith who was reefing the sail had a narrow escape for had the mast not partially fallen, giving warning, he would either have been killed or knocked overboard. The crew cut away the rigging, allowing the mast to go clear and then put a spar to the stump and hoisted signals of distress. The OYSTER GIRL (FD115) passed within 200 yards, but probably owing to the weather could not risk stopping. The skipper let go the anchor and assessed the damage. About an hour later the mainmast and rigging floated close past the smack. This caused some anxiety, as it was generally supposed that the smack MARY ELLEN (FD21) first lost her mast and was afterwards sunk owing to it coming in contact with the boat. At about 11.00pm, the smack was spoken by the smack BADGER (FD55) who stayed with them overnight, their positions being marked by torch lights.
27.9.1883: At 6.00am weighed anchor and an hour later, the BADGER having closed and connected, the tow was underway. Several of the smacks that had returned yesterday reported that the HARRIET was seen with decks swept and masts gone. At about 10.00am the smacks WONDER (FD68) and BEAVER (FD55) sailed with volunteer crews of eight to ten men each to search for the HARRIET. They had not got far, however, before they met the disabled smack in tow of the BADGER. Arrived of Steep Brest about 1.00pm and met by steam tug WARDLEYS (122grt.1882), the service of which, however, was refused. Numerous spectators greeted them on arrival.
5.10.1883: Reported that mast and gear except standing rigging belonging to the smack has been picked up north of Ravenglass. Mr Maskell, the owner, has been to claim it, and it will be forwarded to Fleetwood by rail.
From at least 1886: Engaged in the coasting trade (Taylor, master) mainly out of Whitehaven but also Workington and Maryport. Ports visited, principally Garlieston, but also Wigtown, Creetown, Kirkcudbright, Dalbeatie, Port William, Ramsey and Larne, most likely with coals, returning either light or with grain, potatoes, etc.
1887: Sold to George Maskell, 25 London Street, Fleetwood.
18.1.1889: Arrived Whitehaven from Garlieston.
12.9.1893: Arrived Fleetwood.(Taylor, master).
24.10.1893: Sailed Fleetwood (Taylor, master) for Port Erin, IoM.
1.1894: Sold to Hamilton Dixon, Whitehaven & others. Hamilton Dixon managing owner.
1895: Remeasured 14n.
1894: Colchester registry closed. Registered at Whitehaven (WA56).(2/1894).
13/14.2.1895: A severe snow storm accompanied by a perfect gale of wind hit the Cumberland coast and the Solway Firth. In the area was the HARRIET and for 25 hours she encountered the worst of the weather.
14.2.1895: Arrived Garlieston., Wigtownshire, her appearance, covered with ice and snow, was that of a ghost ship. One of the crew had frost bite and all had traces of exposure.
17.2.1895: Arrived Whitehaven from Garlieston.
29.12.1915: Whitehaven registry closed. Broken up.

History
4.9.1855: Advertised. For Sale by Private Treaty, THREE FISHING SMACKS, namely the JANE, Fifteen Tons Register; the MARGERY, Twenty-one Tons: the SPARKLER, Seventeen Tons. They are each in good Working Order, have Nets and Trawl Gear, complete and are at present fishing out of Fleetwood. Applications to be made to John Jackson, 1 West Street, Whitehaven; or to Ebenezer Cox, Fleetwood. August 15th, 1855.

7.7.1856: Sailed on the morning tide for the fishing grounds. The wind was variable changing direction and freshening throughout the day. At about 11.30pm it started to blow from the north.
8.7.1856: At 12.30am a furious gale suddenly blew up and the Fleetwood fleet 12 in number, which were lying off Black Combe, north of Duddon Estuary, received considerable damage. Lost the foresail. The smacks then laid their vessels under snug canvas and the wind later being favourable for them to reach Fleetwood; left the area.
10.7.1856: Most of the fleet arrived home about 6.00am without further damage.
17.7.1862: Report by John Studholm, master.
10.7.1862: Fishing out of Whitehaven. In a strong NNW wind, when some two miles wide of Douglas Head at about 8.00pm picked up a gig with five hands onboard which was in a sinking state. The crew of the gig were bailing with their shoes and it was their cries that first attracted Capt. Studholm’s attention. The trawler was put about, the crew brought onboard and with the gig in tow brought them into Douglas. For this service the owner of the boat, Mr Nicholson, a painter, of Douglas, presented Capt Studholm with 5s for saving the boat. FATE.