28.1.1869: At 11.00 am, launched by Robert Wright, Freckleton for William (“Owd Billy”) Leadbetter and Thomas Leadbetter (his son), Fleetwood as Dotterel.
13.2.1869: Appropriated.
13.2.1869: Registered at Fleetwood (FD5).
1.1.1875: Owned by William Leadbetter, Fleetwood.
24.9.1879: Fishing off the Cumberland coast (Sk. William Leadbetter). At about 9.30am when some 9 miles off the Duddon Buoy, observed a body floating in the water. Hove to and launched boat, succeeded in recovering the body, identified as that of James Scott (33) washed off the smack SYREN (FD30) while trawling to the north of the Barrow Ironworks three weeks previously. The body was left in the boat and towed back to Fleetwood arriving at about 6.30pm.
25.9.1879: At the inquest held in the Crown Hotel, Fleetwood a verdict of “Accidentally drowned” was recorded. The jury expressed a strong opinion that the body, having been immersed in water for three weeks, should have been taken to the mortuary and not taken to the home of the deceased.
1881: Census at Fleetwood – William Leadbetter (37), b-North Meols, master fisherman; Robert Wilson (65), b-North Meols, mate; William Baxter (39), b-North Meols, fisherman; James Middleton, b-Stafford, fisherman; Richard Rimmer (14), b-Fleetwood, cook.
1885: Owned by Thomas Leadbetter (43/64) and Sk. William Leadbetter (21/64), Fleetwood.
7.10.1885: Sailed on the morning tide from Fleetwood for the fishing grounds (Sk. William Leadbetter). When about 3/4 mile beyond the Danger Patch Buoy and standing out on the starboard tack across the Lune, at about 11.50am, the cook, who was at the helm, observed a smack on the port tack bearing down on them. The cook left the tiller and rushed to call out the crew. When the mate arrived on deck the smack INDUSTRY was only a few yards away and shortly after struck the trawler on the port side by the fore rigging. One crew member scrambled aboard the INDUSTRY and the others took to the boat, the trawler foundering in about 28 – 30 fathoms in the centre of the Lune. Both smacks were being helmed by the cook, as was customary once they were clear of the Wyre Light and the crew were below eating.
1885: Fleetwood registry closed.

1846: Completed by ??, Brixham as SYREN.
3.6.1846: Took part in the Sailing Match for Trawlers sponsored by the Dublin & Kingstown Railway Company.
1853: Registered at Dublin (54/1853).
By 1860: Registered at Galway.
1.1.1967: Owned by George Green, Londonderry. Registered at Londonderry.
1869: Owned by Thomas Seed, Fleetwood.
1869: Registered at Fleetwood (FD30).
187?: Sold to J. Wright, Fleetwood.
1.1.1875: Owned by Thomas Wright, Fleetwood.
6.8.1979: Coming up the Lune in a severe gale, struck by a sudden squall blowing out the belly of the mainsail. Arrived Fleetwood without more damage.
3.9.1879: On arrival at Fleetwood, Skipper Tomlinson reported that while trawling north of the Barrow Ironworks at about 1.00pm fisherman James Scott ( 32) was carried overboard when a sea swept over the deck. No one saw him go overboard but when the water cleared he was missing and observed in the sea close by. Pieces of wood were thrown overboard in the hope that he would catch one and hold on but he disappeared. The smack was kept in the area for some time but nothing more was seen of him. Scott had a narrow escape on the previous trip when a sea broke close by on the starboard side, before sweeping the deck.
1.1.1880: Owned by Thomas Leadbetter, Fleetwood & others.
23.8.1881: At Fleetwood in the Sailing Match for Fishing Boat’s Punts, came third (John Wright).
17.11.1883: In a strong southerly gale, Henry Fisher (46), bosun of the Liverpool registered steamer ANNIE (411grt/1883), on passage Belfast – Fleetwood, was a adjusting the port navigation light when the vessel pitched heavily and he was thrown on deck and died within an hour. The body was landed at Ramsey where examination showed that he died of spinal injuries. Transferred to the SYREN (Sk. Henry Leadbetter) for passage to Fleetwood.
24.11.1883: Arrived Fleetwood, Body placed on train for journey to his home at Freckleton.
24.10.1887: Sold to ??, Fleetwood.
1902: Off the Cumberland coast (Skipper Robert C. Sumner). Reported that the trawler was driven ashore on Drigg beach, Ravenglass, Cumberland. Skipper and two crew safe.
13.9.1902: FOR SALE by AUCTION on FRIDAY 19.SEPTEMBER 1902 at Half-past Three o’clock, as she now lies Stranded on the Beach near Drigg Station. She is a Wood-built Smack, in Good Order, 24 Tons Register, with Iron Knees and Keel. A Splendid Pitch Pine Mast and Rigging, 2 Windlasses and Large Pitch Pine Boom (new) and Top Mast lying at Drigg Station. The Smack has lately cost £250 in Repairs and can be easily Floated and may prove a profitable speculation. Also several TONS of Copper Dross as Ballast. Terms -Cash.
12.2.10.1902: Fleetwood registry closed. “Broken up”. 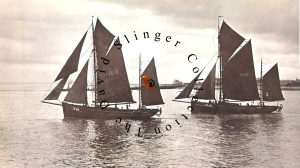 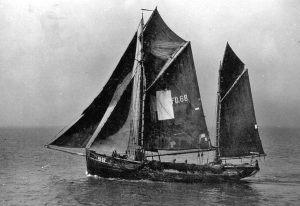 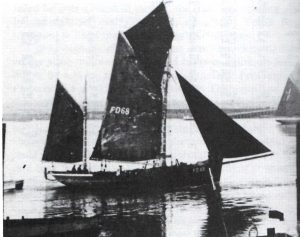