19.9.1896: Launched by Mackie & Thomson, Govan (Yd. No.117) for The Grimsby & North Sea Steam Trawling Co Ltd (64/64), Grimsby as CRATER.
10.1896: Completed.
27.10.1896: Registered at Grimsby (GY111).
27.10.1896: John Richardson Mackrill designated manager.
6.10.1897: Arrived Grimsby in tow of steam trawler ARIZONA (GY580), picked up in North Sea some 80 miles off Spurn, disabled by engine failure. 22.10.1909: At Grimsby, trimmer Fred Barker while carrying a 1cwt drum of carbide, fell on deck and drum landed on his hand, severing one finger and crushing two others.
1.1.1914: Tonnage altered to 54.19 net under provision of Merchant Shipping Act 1907.
14.11.1916: Sold to Ernest Taylor (64/64), Thornton.
14.11.1916: Ernest Taylor, Thornton designated manager.
28.11.1916: Sold to Noah Ashworth, Fleetwood & Ernest Taylor, Thornton (64/64) joint owners).
30.12.1916: Vessel mortgaged (64/64) to London City & Midland Bank Ltd, London (A).
29.5.1917: Requisitioned for Fishery Reserve.
23.1.1917: At Bangor Magistrates Court, Sk. Edward Sylvester was charged with trawling within the three mile limit on 29th December 1916 off Red Wharf Bay, Anglesey. In his absence, Sylvester was fined £20 with costs, plus advocates fee and witness costs amounting to £22.3.10d.
29.5.1917: Requisitioned for Fishery Reserve.
18.10.1918: At Fleetwood Magistrates Court, William Marland, third hand pleaded guilty to disobeying lawful commands. Defendant had signed articles on 17th September last. The vessel was due to sail on 17th October at 12.30 pm. but owing to the weather the sailing was put back to the next tide. Defendant who had been onboard at 10.45 that forenoon was informed of altered time of sailing but at 11.00 pm with all the crew onboard with the exception of the defendant, the entire convoy was held up until a substitute was found. The defendant was found at home and he stated that when they came in from sea he refused to sail again until a proper deckhand and spare hand were shipped, as he had to do the work of others that trip. He had given the company plenty of time to get another third hand shipped in his place. Marland had a clean record and the company was prepared to take him back if the Magistrates considered a fine was appropriate; fined 40s and advocates fee.
30.1.1919: At Fleetwood Magistrates Court, William Cloney was charged with disobeying a lawful command whist engaged to serve as cook. The ship was due to sail at 8.30 am. on 29th January and the defendant failed to join resulting in a delay until the next tide. Defendant pleaded not guilty saying he had missed his train at Preston, however he had several convictions for similar offences and had been fined by the court in December last; the fine had not been paid and the firm would have nothing more to do with him; sent to prison for 14 days with hard labour.
1919: Released.
18.7.1919: Grimsby registry closed.
20.7.1919: Registered at Fleetwood (FD330).
1923: Sold to Joseph Dixon Irvin, Thomas Thorburn Irvine and Sk. James Wood Anderson, North Shields. Joseph Dixon Irvin designated manager.
28.11.1923: Fleetwood registry closed.
29.11.1923: Registered at North Shields (SN135).
2.2.1926: Whilst fishing, some 6.5 miles east of Souter Lighthouse, struck a submerged object and making water. Pumps unable to cope with ingress of water, crew of nine including skipper Albert Annon, abandoned in boat and trawler foundered as they pulled clear. Boat picked up by steam drifter SETON CASTLE (GN65) (Sk. Andrew Hughes) and towed into North Shields.
15.6.1926: North Shields registry closed “ Total Loss”.

NOTE : she was returning to Tyneside after a fishing trip when she struck an unidentified submerged object, believed to be wreckage, and sank some 6.5 miles to the east of Souter lighthouse.
The wreck, which has yet to be positively identified, lies on hard sand and shale in a spoil ground area at a depth of 54m, the lowest astronomical depth. The wreck is intact except for damage to the quarter deck and forecastle structures which have collapsed. 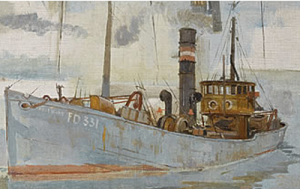 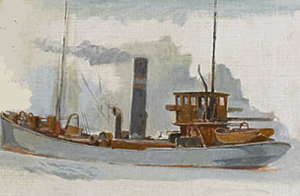