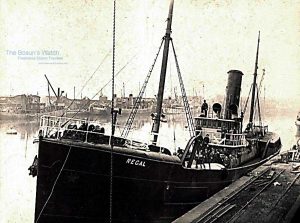 25.7.1914: Launched by Cochrane & Sons Ltd, Selby (Yd.No.609) for Humber Steam Trawling Co Ltd, Hull as SEA RANGER.
6.11.1914: Registered at Hull (H188).
11.11.1914: Completed (Richard H. Hobbs, manager).
2.1915: Requisitioned for war service as a minesweeper (1-12pdr, 1-6pdr HA) (Ad.No.1219). Fitted as Leader. Based Peterhead. Leader Unit 42.
16.7.1915: Unit 42, at 0830 am. in position 57.20N 0.40E patrolling in a rough line to the NW in the following order SEA RANGER) (Lieut. H. J. Bray RNR), EASTWARD HO (Ad.No.1217)(H415) and CAMEO (Ad.No,1216) (H394) (Sk. Albert Sayer RNR) approximately 2 miles apart. Observed a steamer steering erratically and detached to close her to investigate. Found Norwegian steamer VAAGEN picking up lumber lost from her deck cargo. At the same time CAMEO turned southwards to examine a boat that had passed and sighted a surfaced submarine to the SW steaming towards him, turned towards submarine which fired a shot at him falling short followed by at least four other shots that also fell short. At 2000yds submarine opened fire with two guns, returned fire but hit three times in fore part of wheelhouse, smashing wheel and wounding Sk. Sayer on right side and eye by splinters. Second shot hit starboard quarter while the third shot exploded in the galley. Believed that submarine was hit two or three times at the fore end, in all 11 rounds fired by CAMEO. EASTWARD HO becoming aware of the action steered towards them and submarine ceased firing and headed away to the westward on the surface. Sighted the submarine 4 to 5 miles to the southwestwards and gave chase trying to cut her off with EASTWARD HO also in pursuit but due to superior speed the submarine escaped (See Note 1).
1916: Based Peterhead.
27.5.1916: With HMTrawlers OKU (Ad.No.1355)(CF25), RODINO (Ad.No.1230)(GY836) and KIMBERLEY (Ad.No.11)(GY167) patrolling Area B between Lat 57.10 and 57.39. At 12.30 pm. GMT observed a sail and smoke to the Northward steering Eastward; proceeded to investigate. Identified as a submarine, as per orders Unit proceeded to encircle submarine. At 12.45 pm. in position 57.10N 1.20E with OKU and RODINO , opened fire at 4000 yds, range found and one shot observed to strike submarine aft; fire returned directing shots at each trawler alternatively. Submarine after gun ceased firing engaged by forward gun but shots failing short, with periscope and part conning tower shot away and listing to port, appeared to be attempting to submerge. With OKU intended to ram but submarine headed for KIMBERLEY which made ramming impossible as submarine was was approaching within 8 ft of KIMBERLEY, broadside on with very little way on. As KIMBERLEY passed she fired three shots into the submarine at point blank range, submarine at the time being heeled over heavily to port sinking stern first. Submarine sank at once after last shot fired with a large quantity of oil on the surface. Time 1.30 pm. Unit fired 58 shots in all and submarine about 20. (See Note 2). Northern Patrol.
Post 12.3.1919: Returned to owner at Hull.
4.12.1919: Sold to Fresh Fish Supplies Ltd, Hull (Thomas Nightingale, manager).
4.1923: Sold to Henry Elliott, Fleetwood (managing owner).
13.4.1923: Hull registry closed.
18.4.1923: Registered at Fleetwood (FD426).
08.07.1923: Sold to The Sun Steam Trawling Co Ltd, Fleetwood (James W. Armitage, manager).
4.1928: Sold to The Trident Steam Fishing Co Ltd, Hull (G. A. Ledger, manager).
18.4.1928: Fleetwood registry closed.
20.4.1928: Registered at Hull as DUNGENESS (H418).
5.1940: Requisitioned for war service as an anti-submarine trawler (P.No.NI) (Hire rate £70.2.8d/month).
15.11.1940: Damaged by German air attack off Hammonds Knoll, stayed afloat and beached on Haisborough Sands, Norfolk; Ty/Prob Skipper C. W. Needham RNR and crew saved. Subsequently declared a total loss.
16.1.1947: Hull registry closed.

(Note 1: Research by Peter Bell and Michael Lowery has identified the submarine as U19. In her KTB she claimed two hits on CAMEO and accurate firing from CAMEO’s 3-pdr. Sk. Sayer was awarded DSC and gunner the DSM.)

(Note 2: Despite this encounter being well recorded in the Patrol Reports, and the description of the submarine fitting a U-series torpedo attack boat, we have failed to identify the submarine. Michael Lowery has investigated with the following comment. “May 27 incident involving SEA RANGER, OKU, RODINO, and KIMBERLEY: checked the KTBs of U 24, U 32, U 43, U 44, U 46, U 47, U 51, U 52, U 63, U 66, U 67, U 70 — no luck. These are, I think, all the U-series torpedo attack boats that were at sea at that time.” Subsequently in U66 KTB is a report of intercepting a British radio message “… proceeding to fifty seven twenty seven — to assist SEA RANGER engaging submarine.” 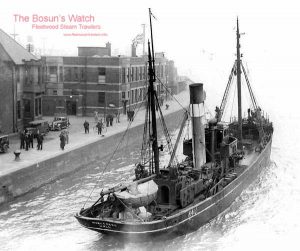 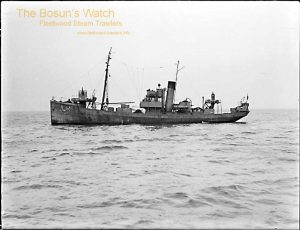 (Note* – Following BoT Inquiry at Hull the findings were published on 24.3.1914 concluding that;
“The stranding of, and serious damage to, the steam trawler Princess Louis was caused by the wrongful act and default of the skipper and of the second hand. As the skipper on the early morning in question was suffering for very severe indisposition, as he bears an exceptionally good character and as he gave his evidence with absolute straightforwardness the Court suspends his ticket (No.6483) for three months only from the date herof. The Court suspends the certificate (No.10696) of the second hand, who in his evidence displayed both ignorance and indifference and did not adequately assist the skipper, at a time when he most needed it, for a like period.”) 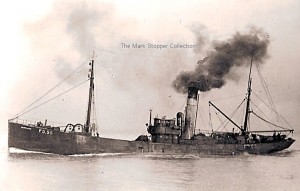 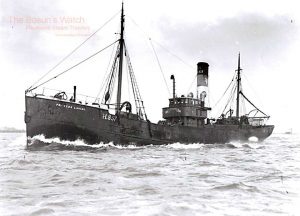