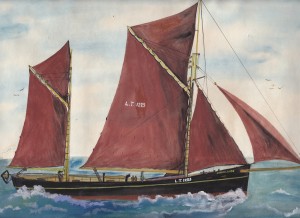 Note: The French Armed Auxiliary Cruiser VILLE D’ALGEIR was leading a French Transport, escorted by four destroyers, through the Irish Sea, on passage from Namsos, Norway. She was carrying “Chausseurs Alpins”, French Mountain troops, part of the Allied Expeditionary Force sent to aid in the failed defence of Norway. As the French convoy passed the west coast of the Isle of Man it encountered a sea mist.

Shrouded in the mist and in the path of the convoy, the steam trawler OONA HALL was unawares of her impending doom.
VILLE D’ALGEIR ran the trawler down, drowning eleven of the twelve crewmen, 8 miles north west by north of Peel breakwater. The sole survivor was picked up by the French vessel. He could recollect little of the incident, being asleep when the crash came. Instinctively rushing for the openness of the deck he was knocked senseless by something unseen. He only regained consciousness when he was pulled from the sea.