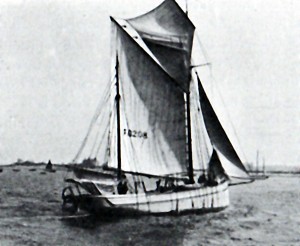 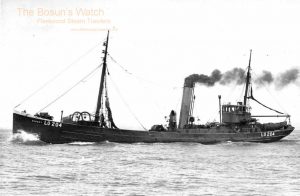 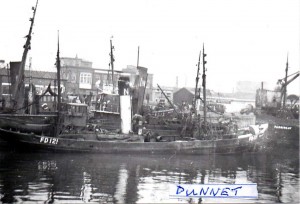 A little while later a shell struck the J. BAELS-MAURICX on the port side, shrapnel went through the wheelhouse, breaking the windows, damaging the funnel and wounding the gunner in the leg. About half an hour before the submarine’s final approach a shell pierced the shell plating close to the rudder and the ship started to take in water.
Arrangements were made to transfer the crew to the J. BAELS-MAURICX but examination showed that although the cabin was flooded the vessel had stabilised. On the submarine’s third approach two rounds were fired by each trawler which were considered hits, resulting in the submarine breaking off the engagement. In total 47 rounds fired, five rounds remaining after the 31/2 hour engagement. Despite the damage, it was decided to proceed at best speed to Castlebay, Barra to seek medical attention and assess the situation.

10.8.1918: At Castlebay, the doctor had tended the wounded and after discussion with the other skippers and bearing in mind having already steamed 130 miles in a fresh breeze, decided to sail for Fleetwood, a distance of about 250 miles, keeping inside the islands; sailed for Fleetwood at 9.30pm.
12.8.1918: At 9.00am. passed Lune Buoy and came to anchor, proceeded to Wyre Dock on the afternoon tide and reported incident to Lieut. James A. Robertson OBE RNVR, Port Fishery Commander. On survey found found more shell plating damage and rivets sprung.
5.9.1918: At the Wyre Dock Cafe a a luncheon was held presided over by Lieut. Robertson in his role as president of the Fleetwood Fishing Vessel Owners’ Association. This was followed by an address and presentation by Cdr Abbott RN of a gold watch and gold albert to each skipper and silver watches, all suitably inscribed, to all crew members of the three trawlers. *
1919: Released.
1.1920: Sold to Thomas H. Smith, Fleetwood.
19.1.1920: Aberdeen registry closed.
20.1.1920: Registered at Fleetwood (FD366).
11.2.1920: Sold to John Gallen, Donegal, Co. Donegal.
12.4.1920: Sold to Irish Steam Trawling Co Ltd, Killybegs, Co. Donegal. William J. Malloy designated manager.
24.10.1921: Sold to William McCabe, Dublin.
4.5.1923: Fleetwood registry closed.
5.1923: Registered at Dublin (D215). William McCabe designated managing owner.
1926: Sold to Trawlers (Ireland) Ltd, Dublin. Patrick Fannon designated manager.
1927: Sold to Dublin Trawling, Ice & Cold Storage Co Ltd, Dublin. Patrick Fannon designated manager.
1938: Sold for breaking up. Dublin registry closed.

* Due to the commendation submitted to The Admiralty by Lieut. Robertson and endorsed by the Port Commander, Cdr. C. W. Muir RN, The Admiralty awarded Sk. Cooke and Sk. Hume the DSC and the gunners from both ships the DSM.