8.11.1911: Launched by Cochrane & Sons Ltd, Selby (Yd.No.509) for The Star Drift Fishing Co Ltd, Lowestoft as BEACON STAR.
23.12.1911: Registered at Lowestoft (LT770).
6.1.1912: Completed (George Catchpole, Kessingland, manager).
9.1915: Requisitioned for war service as a boom defence drifter (fitted out as workshop). Based Scapa.
Post 12.3.1919: Returned to owner at Lowestoft.
1930s: Seasonal trawling from Padstow and Fleetwood (Lowestoft Fish Selling Co Ltd, Lowestoft, managing agents).
17.2.1937: Sailed Lowestoft for Padstow (Sk.Harold Hambly) in company with CONSTANT STAR (LT1158) and ONE ACCORD (LT324).
18.2.1937: In rough weather off the Devon coast came upon a fleet of French trawlers and in passing them safely became detached. Last spoken to when off the Eddystone Light and agreed to call next morning.
19.2.1937: No response to call and with weather worsening, CONSTANT STAR and ONE ACCORD put into Newlyn. With no response to further calls and no sign of vessel inwards to Newlyn, reported missing. Offer of The Admiralty to carry out a search accepted by Mr Catchpole.
16.3.1937: Search by warship, seaplane and enquiries along the French Coast, negative. Lowestoft registry closed. “Missing from 19.2.1937”.
Early 4.1937: Ship’s boat found off Cherbourg. No survivors. 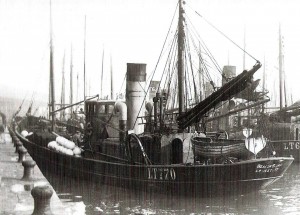 1873: Completed by ??, St. Ives as SPRAY.
1874: Owned by Isaac M. Sibbald, Morecambe.
18.5.1874: Registered at Lancaster.
18.5.1874: Appropriated.
4.11.1875: At Whitehaven in company with AMETHYST (FD107), CONFIDENCE (FD121) and PETREL (FD59). Attempted to leave harbour. Informed by Mr Dawson, collector of dues, that they could not leave until harbour dues paid. As they refused to pay, the harbour tug was moored across the entrance to prevent them leaving. CONFIDENCE and PETREL skippers decided to pay, but AMETHYST and SPRAY continued their attempt to leave, one of the crew of SPRAY cut the tug’s head ropes and AMETHYST fell foul of the tug, smashing her boat. AMETHYST and SPRAY boarded by harbour master and mainsails confiscated.
6.11.1875: Skippers attended at the office of the solicitors to the Harbour Trustees and consented to pay all dues, damages and costs. Sails returned and allowed to sail.
1.1.1880: Owned by William Hudson, Fleetwood. Registered at Fleetwood (FD147).
1.1.1888: Owned by Mrs Margaret Hudson, 48 Warren Street, Fleetwood.
1.1.1889: Owned by James Armour, Adelaide Street, Fleetwood (managing owner).
6.11.1890: In SSE force 8 gale, seeking shelter and beating up the Wyre channel (Sk. David Cawell), when near the Knottspit Buoy, in going about missed stays. An attempt was made to wear ship, but this failed and about 6.30pm she was carried on to a bank on the east side of the channel. The sea was very rough and with the gale force wind, the situation was critical for the crew of four.
8.11.1890: At low water about 3.00am the fishermen, with the exception of the skipper, left the smack and walking across the sands to reach Knott End. The skipper had remained behind to fasten up the cabin and in trying to catch up with his crew he unfortunately got into the Knott Gulf. The tide was flowing at the time and he was unsure whether to return to the smack. Fortunately he decided to make a long detour to eastward and reached the shore. From Fleetwood the smack was seen to be submerged all but for her mast and there was concern for the safety of the crew. At about 8.00am three ferry men and three fishermen took one of the ferries across to Knott End and found the crew safe in the Bourne Hotel. The boat returned across the Wyre with the crew and received a hearty welcome from the assembled crowd. In the afternoon James Armour accompanied by fourteen fishermen and two carts went out to the smack and saw that she was already about eight feet deep in the sands. All loose gear, such as sails, ropes etc was brought ashore.
9.11.1890: Having dug out around her and removed all the ballast with the incoming tide she came afloat, but gradually sank again and it was discovered that she was holed.
12.11.1890: A further attempt to salve the smack was made but the tow rope parted and the attempt was abandoned. The SPRAY was valued at £400 and was insured. Fleetwood registry closed.

Note: Mrs. Eccles lost her husband, two sons and all their lifetime savings and was left penniless with four children. An appeal for help for her and Mrs. Sherlock was made at the end of the inquest.

Note: On 22 Dec 1894 MAUD PICKUP (Cox Robert Wright) which was newly arrived that year was launched to the 3-masted Barrow schooner ANNIE PICKUP and all crew saved. 120mph recorded at Fleetwood night of 21/22 Dec.